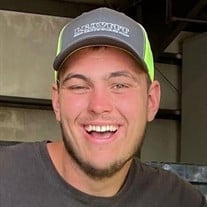 It is with profound sadness among his many adoring family and friends that we grieve the lost life of Zebulun Carpenter Leavitt, 20, who tragically died on Sunday, December 13, 2020 in a car accident in Gorham, Maine. Zeb was born into richness... View Obituary & Service Information

The family of Zebulun Carpenter Leavitt created this Life Tributes page to make it easy to share your memories.

It is with profound sadness among his many adoring family and...