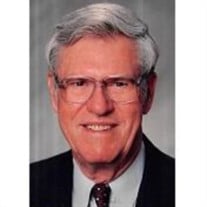 Falmouth: William Whipple Poole, beloved husband of Dana Poole, died May 13, 2021 at Falmouth House at Ocean View in Falmouth, Maine. He was 98. Born February 10, 1923 in Portland, Maine to Parker Poole Sr. and Marjorie Shurtleff Poole, he grew up in Portland and attended MacLellan, Butler, and Deering High School. After graduating from Kimball Union Academy in 1942 he started his studies at Dartmouth College. He joined the US Army in 1943 and served in the European Theater in the 158th Combat Engineering Unit of Patton’s Third Army. He fought at the Battle of the Bulge and participated in the crossing of the Rhine River. Bill returned to Dartmouth in 1947, joined the Theta Delta Chi fraternity and graduated in 1948. He remained a lifelong supporter of his schools, fraternity, and his military unit. In 2011, he self-published his memoir, “My Experience in the US Army during World War II- 1943 to 1946”. After the War, Bill joined his father Parker Poole Sr. at the W.H. Shurtleff Company, a wholesale distributor of salt and chemicals, on Union Wharf. With his brother Parker Poole Jr. and his nephews, Malcolm and Charlie Poole grew the Shurtleff Company to a New England -wide supplier and the Union Wharf property to a centerpiece of Portland’s working waterfront. At the time of his death, Bill was Chairman of the Board of Poole Group of Companies, the successor to the W.H Shurtleff Company. In 1970, Bill married Dana Smith and together they enjoyed extensive time in New York City, Palm City Florida and traveled to many corners of the world. Dana added many dimensions to his life after being a bachelor for so long and in recent decades provided strong counsel and partnership in his life. Bill was a true believer in physical fitness and personal health long before it became mainstream. He was a fierce competitor in business, and in his many sports and activities: sailing, tennis, golf, skiing, biking, Concept II rowing and Bridge, winning many championships. He became a judge and official for The U.S. Sailing Association and their Match Racing Championships, the most significant of these being chosen as an alternate judge for the America’s Cup. Bill was a long-term member of the Portland Yacht Club, Portland Country Club, The Cumberland Club, and the Sugarloaf Mountain Ski Club. One of Bill’s claims to fame was his participation in cutting “Old Winter’s Way” at Sugarloaf in 1951. Bill was generous with his time and financial support to many community organizations and nonprofits, with special connections to The Portland Stage Company, Sail Maine, The Portland Museum of Art, The Children’s Theater, The Animal Refuge League, and Northeast Sailing Association. He was a gentle and firm instructor of young people in each of these areas and could always be counted on to make the day challenging, instructive and fun. In addition to his wife Dana, Bill is survived by his Poole nephews and nieces and their spouses: Malcolm and Patti Poole, Parker Poole III and Diane Schinella Poole, Charles and Elizabeth Poole, Christina Poole Thomas and Henry Thomas, Alexandra Poole Sawyer, and Mark Sawyer, and 19 great nieces and nephews. Bill will be fondly missed by many dear friends. The family would like to express special thanks to the staff at Falmouth House at Ocean View, Compassus Hospice Care and Amada Senior Care for the special support they gave Bill in his last months. A memorial service honoring Bill’s life will be held June 15 at 11:00 AM at State Street Congregational Church, 159 State Street, Portland. In lieu of flowers, donations to Portland Stage Company, Sail Maine or Friends of Casco Bay would be deeply appreciated. Arrangements are by Dolby, Blaise and Segee, Westbrook, Maine

The family of William Whipple Poole created this Life Tributes page to make it easy to share your memories.

Send flowers to the Poole family.