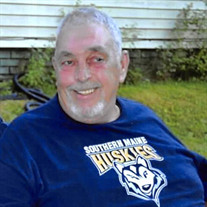 STANDISH—William Everett Leeman III, 71, passed away March 22, 2021 at his home. He was born June 29, 1949, a son of William and Barbara (Keating) Leeman. Bill grew up in Westbrook, graduating from Westbrook High School in the class of 1968. He went on to further his education through technical training earning his Journeyman’s credentials. Bill went on to proudly serve in the Navy for nearly 4 years during Vietnam. Following his honorable discharge he began his career as a sheet metal worker and was a member of Local #17 in MA. He was a skilled tradesman who took pride in his hard work. On April 29, 1978, he married Debra Arsenault and the two made their home in Standish, raising their family. Bill was an avid outdoorsman who enjoyed camping (especially during the 4th of July), fishing, four wheeling, and hunting. Bill loved a good game of cribbage, especially when playing with his granddaughter and friends. He was a tinkerer who was happiest spending time in his beloved heated garage, a sanctuary he was proud to have built himself. Bill truly was a jack of all trades who also knew how to relax and enjoy the simple things in life. Bill will be remembered for his outgoing personality, famous one liners, and love for his family. He is survived by his loving wife of nearly 43 years, Debra Leeman; children Kevin Leeman and his girlfriend Tammy, William Leeman IV and his wife Molly, and Kimberly Woodard and her husband Ronnie; siblings, Dennis Leeman and his wife Judy, and Bonnie Gillis and her husband Gary; grandchildren, Jennifer Leeman and her fiancée Tim Sprague, Elizabeth Leeman, Jillian Leeman, Natalie Woodard, William Woodard, Erin Woodard, Andrew Woodard, and Jason Leeman; as well as many other extended family members and nieces and nephews. He was predeceased by his parents. The service for Bill will be private. A public visitation will be held on Saturday, March 27 from 5pm to 7pm at the Westbrook Chapel of Dolby Blais & Segee, 35 Church St., Westbrook. Burial will take place on Friday, May 14, 2021 at 1:00PM at Woodlawn Cemetery in Westbrook. In lieu of flowers, please consider donating blood to your local blood bank in memory of Bill.

STANDISH&#8212;William Everett Leeman III, 71, passed away March 22, 2021 at his home. He was born June 29, 1949, a son of William and Barbara (Keating) Leeman. Bill grew up in Westbrook, graduating from Westbrook High School in the class of... View Obituary & Service Information

The family of William Everett Leeman III created this Life Tributes page to make it easy to share your memories.

Send flowers to the Leeman family.