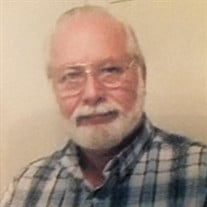 William W. Johnson Sr. Windham - William Woodbury Johnson Sr. 74 On Wednesday, May 26th, 2021, William W. Johnson Sr., Loving Husband, Wonderful Father, Papa, Great Papa, and Friend went home to be with his Lord. Bill was born on December 22, 1946, in Portland Maine to his parents Lucille and Alexander Johnson. At a young age, when his mother passed away, Bill and his sister Linda spent part of their childhood living on Long Island, Maine with their Aunt Muriel Pisack. They attended the Long Island School and went to church and Sunday school with many friends. At the age of 12, Bill started working on a lobster boat as a helper every summer. He truly enjoyed being on the water. He loved the beauty of the ocean and the quietness and peace of a lake. Bill proudly serviced in the United States Navy during the Vietnam War. After serving for 4 years he returned home to Long Island, Maine where he met the love of his life Catharine Johnson and on July 11, 1969, they were married and began their life together in a little home, on Long Island in Casco Bay, where they were blessed with 2 wonderful children Lucille Marie Johnson and William W. Johnson Jr. Bill will be deeply missed but his memory will live on through his children, his family, and his friends. Bill leaves behind his son Billy and His Wife Crystal, His daughter Lucy and her husband Pastor Will Kindred. 5 grandchildren, Alec Kindred and His wife Brianna, Liam Kindred, Nicole Winkel john and her husband Cory, Nick Kindred, Taylor Johnson, and four Great Grandchildren, Bennett, Asher, Theodore, and Brooklyn. Bill was such a Loving man who taught his family that Faith in God, Truth, and Honesty are the most important things in our lives. Bill would drive his family to church every Sunday no matter the weather, as they sang songs together in the car, and even though Bill was a little tone-deaf, he enjoyed singing along with his family. Bill also was the most amazing Dad to his children, He encouraged them, He supported them, and even though He was a gentleman, He disciplined them with a firm No, if necessary. Bill was a Master Electrician who taught his son Billy the electrical trade at a young age. By the time his son was in high school, he could do almost any electrical job. Bill always stood by his children with Love and gave them direction in their young lives. Bill was also a Ham Radio operator and a member of the (MAR) Military Amateur Radio and when young men and women were serving in the military in Iraq, before cell phones, Bill would patch them through to their parents and allow them the opportunity to talk to each other. This service he performed was deeply appreciated by the soldiers and their parents. Bill had his own electrical company for many years and continued to work as an electrician through the years. His last position before he retired at 70, was at The Barron Center in Portland, working in electrical and maintenance. Bill really enjoyed talking with the elderly residents, encouraging them, and helping them with their needs. Bill was a Humble Man who was Strong in his convictions and beliefs. He enjoyed the time together with family and friends and sharing stories of the day. He looked forward to hunting ¾ith his son, but mostly the lunch break where they would talk, laugh, and share their hunting adventures. If Bill was your friend, he would be your friend for life. We want to sincerely thank Bill's good friends David and Matthew, who walked with Bill each day sharing stories and who was with him when he passed. Although this was a difficult moment for you both to experience, Bill truly enjoyed the time spent with you and the wonderful friendship that you all shared. A Christian funeral will be held at the Windham Chapel of Dolby Blais & Segee 434 River Road, Windham, on Monday June 7th at 1:00 PM, a special burial with Military Honors will follow at Arlington Cemetery on Rte. 302 in North Windham, next to the fire station.

The family of William W. Johnson Sr. created this Life Tributes page to make it easy to share your memories.

Send flowers to the Johnson family.