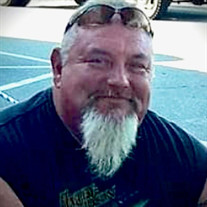 WESTBROOK—William Eugene Bushey Jr., passed away suddenly on May 31st, 2020. His passing followed three and half years of medical complications from a work injury. Throughout this difficult time, he managed to maintain a positive outlook, and to truly appreciate the little things. Bill, as he was better known, was a loyal, loving man, who was most proud of his family. His wife and sons meant everything to him. Bill was born in Texas, on August 7, 1968, a son of Frances (Sloan) and William Eugene Bushey Sr.. He moved around some as a child, eventually settling in Portland, Maine, where he met the love of his life, Barbara O’Malley, and played football for Deering High School. Playing for two semi-pro football teams, he was more than qualified to coach his sons in the sport he was so passionate about, and did so with great pride. When he wasn’t smoking meat in the backyard, riding around on his Harley, or enjoying a marvel movie, you could find Bill surrounded by friends and family. He was the first to offer a helping hand, a Miller Lite, or a dirty joke, whichever the situation called for. His time on Earth was far too short, but he was larger than life even while he was here. His loud laugh could never be forgotten, and he will be missed forever. Bill is survived by his wife, Barbara (O’Malley) Bushey; sons, Billy and Zachary; mother, Frances (Sloan) Bushey and father William Bushey Sr.; brother, Stephen Bushey; and countless close friends, nieces, nephews, cousins, aunts, and uncles. A memorial visitation will held on Friday, June 12, 2020 from 4pm to 8pm at the Westbrook Chapel of Dolby Blais Segee, 35 Church St., Westbrook, ME 04092.

WESTBROOK&#8212;William Eugene Bushey Jr., passed away suddenly on May 31st, 2020. His passing followed three and half years of medical complications from a work injury. Throughout this difficult time, he managed to maintain a positive outlook,... View Obituary & Service Information

The family of William Eugene Bushey Jr created this Life Tributes page to make it easy to share your memories.

Send flowers to the Bushey family.