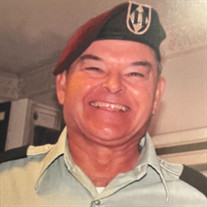 WINDHAM - Capt. Wilfred B. Watters, 73, of passed away on May 21, 2021, at Maine Medial Center following a motorcycle accident. He was surrounded by his loving wife, two daughters, and his mother at the time of passing. Will was born on March 8, 1948, at Fort Bragg, in Fayetteville, North Carolina, son of Elizabeth and Vernon Watters. Will's family traveled the world while his father was in the Army. He graduated High School in Italy in 1966. After college, Will enlisted in the Army and attended Officer Candidates School (OCS), as well as Rotary Wing Flight School. During flight school Will met the love of his life, Annette, they were married on May 29, 1971. From there Will served proudly in the Army, during the Vietnam War, as a Medevac Helicopter Pilot from 1971-1972. After returning from Vietnam, he remained on active duty, state-side. Will retired from the Army in May of 1980. Following his military service, Will focused his attention on volunteer activities in the community, as well as his family. He enjoyed the time he spent volunteering for the Windham Ski Program at Shawnee Peak. Anyone who knew Will knew that he was an avid fisherman and loved his time on the water. He first teamed up with his Father, and they became members of Southern Maine Anglers, then Eagle Bass Masters. They volunteered together for Camp Sunshine where they took terminally ill children fishing. Will got great satisfaction over the many years they did this together. This allowed him to make many wonderful friends over the years. After Will's father passed away in 2014, Will joined forces with Dale Libby, they were like brothers. They fished many tournaments together and Will loved the times that he spent with Dale. Over the years Will realized something was missing, he obtained his Bachelor of Science in Nursing Degree from Saint Joseph's College in Standish, Maine in 1998. He retired from Ledgewood Manor as a Registered Nurse, where he made lifelong friendships. Will then worked part-time for Enterprise Car Rentals to keep busy when he was not on the water fishing or riding his motorcycle. In March, Will attended his 50th (OCS) reunion, where he was able to reconnect with his "band of brothers". Will was predeceased by his father, Vernon G. Watters; and sister, Joan (Watters) Beach. He is survived by wife of nearly fifty years, Annette (Sparks) Watters; daughters, Heather N. Humphrey and husband, Barry; and Kristen P. Amero and husband, Jason; grandchild, Greyson A. Humphrey; mother, Elizabeth M. Watters; sisters, Genny Abrams and husband, Alan, Christine Watters and significant other, Brad Dupee, Ann Watters and significant other, Howard Bernier; and brother, Robert Watters and his wife, Carrie. He is also survived by many nieces and nephews, along with several other family members and close friends who will miss him dearly. Will’ s larger than life personality will be missed by all that knew him. A public visitation will be held 6 to 8 p.m., June 9, 2021 at the Windham Chapel of Dolby, Blais & Segee, 434 River Road. A memorial service will be held, 11 a.m., June 10, 2021 at the Windham Chapel of Dolby, Blais & Segee. Followed by internment at the Southern Maine Veterans’ Cemetery at 1:00pm, 82 Stanley Rd, Spring vale, ME. In lieu of flowers, donations can be made in memory of Will Watters, to the Wounded Warrior Project website: Support.woundedwarriorproject.org. To express condolences and to participate in Will’s online tribute, please visit www.DolbyBlaisSegee.com

WINDHAM - Capt. Wilfred B. Watters, 73, of passed away on May 21, 2021, at Maine Medial Center following a motorcycle accident. He was surrounded by his loving wife, two daughters, and his mother at the time of passing. Will was born on March... View Obituary & Service Information

The family of Capt. Wilfred B. Watters created this Life Tributes page to make it easy to share your memories.

Send flowers to the Watters family.