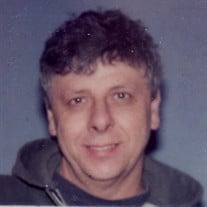 WESTBROOK Wayne J. Wescott, 64, died on March 29, 2021. Wayne had a profound love of the outdoors which he experienced through fishing, hiking, boating, snowmobiling, riding his Honda 90, and the occasional nighttime snowshoe. He was a life-long learner and reader, generously sharing what he knew with others. Wayne was a skilled and knowledgeable machinist taking pride in crafting parts to restore and maintain his many seasoned machines. As a lifelong Westbrook resident, Wayne had an enthusiasm for local history. His fascination with history and the outdoors led to a passion for metal-detecting. Wayne spent countless days in the woods of Parsonsfield finding and preserving historical artifacts. Wayne was a Boston Red Sox fan always preferring to listen to the game over the radio. He inherited a love of music that he leaves as a legacy. His vast collection, spanning from blues to zydeco, brings comfort to his family and friends. Wayne loved his cats and had a soft spot for all animals. He showed this by providing food, water, and affection to the neighborhood cats (and other local wildlife). He will affectionately be remembered as the cat whisperer. Wayne was an employee of Saunders Brothers excelling at operating the log-loader. From there he went to work at S.D. Warren where he mastered driving paper-hauling equipment as a Material Handler; he could expertly navigate the narrow passageways of the mill transporting thousand-pound rolls of paper. This ultimately led to him becoming an instructor and winning multiple awards. Wayne also earned his Oil Burner Journeyman’s license through MODA. He attended Westbrook schools, graduating in 1975. He was active in Little League and the Westbrook school bands especially the Westbrook High School Marching Band where he played the triple drums. Wayne was a loving husband to Diane Lowell Wescott, adoring and proud father of Rachel Wescott Toppi and husband Benjamin Toppi, and Marcia Wescott and boyfriend Forrest Vultee. He cherished his grandchildren Georgia, Michael, Leo, and Dominic Toppi. Wayne was predeceased by his father, the former Mayor of Westbrook, Fred C. Wescott. He is survived by his mother, Lillian Annette Martel Wescott, siblings Susan Blais and husband Robert, Sandra Wescott, Fred C. Wescott Jr. and partner Ricamor Guinoo, Stephen Wescott and wife Cris, a special brother-in-law Donald “Mic” E. Lowell Jr. and wife Mary, sister-in-law Donna Zupco and husband David, Aunt Carol Kennie, many beloved nieces, nephews, and cousins, and Kristina, Kelly, and Kourtney Kentigian, daughters of his dear friend Marty. In honor of Wayne donations made be made to The Animal Refuge League of Greater Portland or The Arbor Day Foundation. A public visitation will be held on Wednesday April 7, from 5:00PM – 7:00PM at the Westbrook Chapel of Dolby, Blais & Segee 35 Church Street, Westbrook. Due to COVID restrictions a private service will be held prior to visitation at 4:00PM. Burial will be held at Woodlawn Cemetery at a later date. The service maybe viewed online using the link provided in Wayne’s obituary at www.DolbyBlaisSegee.com You are invited to a Zoom webinar. When: Apr 7, 2021 04:00 PM Eastern Time (US and Canada) Topic: Wayne J. Wescott Please click the link below to join the webinar: https://zoom.us/j/94037201787

WESTBROOK Wayne J. Wescott, 64, died on March 29, 2021. Wayne had a profound love of the outdoors which he experienced through fishing, hiking, boating, snowmobiling, riding his Honda 90, and the occasional nighttime snowshoe. He was a... View Obituary & Service Information

The family of Wayne J. Wescott created this Life Tributes page to make it easy to share your memories.

Send flowers to the Wescott family.