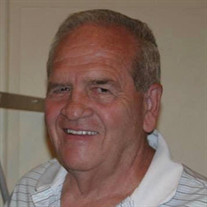 WINDHAM - Wayne Russell Poland, 77, died Saturday, August 15, 2020, peacefully at home after battling a long illness. Wayne was born in Portland. He was the oldest son of John, Jr. and Phyllis Pauline (Woodis) Poland. He attended Portland Schools and Deering High School. Wayne became an IAM (International Association of Machinist) union member in his late teens and early 20's. Then, in 1967, he went to work for the United States Postal Service as a part-time Flexible Clerk and joined the American Association of Post Office Clerks. In 1970, after an illegal postal strike, five unions joined together and became the American Postal Workers Union. Wayne had been a member of the APWU since its inception. He was a Steward, a Craft Director, and for 22 years, the Local President of the Portland Maine Area Local #458. He also spent 10 years as the Maine State APWU President. At the time of his retirement from the Postal Service in 2002, Gov. John Baldacci declared it to be "Wayne Poland Day" at the Maine State House. Due to his dedication to the labor movement, the occasion of his retirement was entered into the congressional record in Washington, DC with US Representative Tom Allen telling of an instance of working with Wayne to save hundreds of postal workers from having to relocate or leave their jobs. He was known by all as a voice of reason and for his hard work, level-headedness and dogged determination to better the lives of workers everywhere. After retirement he served as part of the Southern Maine Labor Council (SMLC), and was active as part of the Maine State AFL-CIO. He held positions on the executive board of the Maine State AFL-CIO and served as Secretary Treasurer of the SMLC until his passing. Wayne was known throughout his life as a fearless advocate for workers and someone who would always fight for what he believed in. He was awarded a lifetime membership award from the APWU Auxiliary for his years of dedicated service. He was awarded the Bridgebuilder Award for his ability to reach across the aisle while advocating for labor. He was named a Working Class Hero by the SMLC in 2012. In his free time, he was an avid golfer and enjoyed many hobbies including gardening and fishing. In addition to his loving wife of 56 years, Doris Bellefeuille; he is survived by his children, Wayne Poland, Jr. of Windham and his wife, Angela, Joseph Poland of Windham, John Poland of Casco and his wife, Martha, and Lori Poland of Windham; grandchildren, Russell Poland of Windham, Jami Parker of Massachusetts, Chelsi (Parker) Spinney of Windham and her husband, Damon; great-grandson, Carsyn Spinney of Windham; siblings, Peter Poland of Waterboro, Rick Poland of Casco and wife, Laura, Phillip Poland of Westbrook, and Amy Batteese of Portland; along with several loving nieces, nephews, grand-nephews, and a grand-niece. A celebration of Wayne’s life will be held 4-7pm, Friday, August 21, 2020 at the Windham Veteran’s Center, 35 Veterans Memorial Dr., Windham. In lieu of flowers, donations can be made to the Auxiliary to the APWU Wayne Poland Memorial, and mailed to 2836 Highway 88, Minneapolis, MN 55418.

The family of Wayne Russell Poland created this Life Tributes page to make it easy to share your memories.

Send flowers to the Poland family.