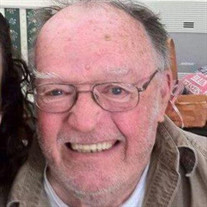 Warren Murchie, 87, of Standish, passed away on October 16th, 2020 with his loving wife by his side after a long battle with congestive heart failure. Warren was born in Center Conway; New Hampshire in 1933 the son of Byron and Mildred Murchie. As a child Warren lived in South Portland and Cornish before moving to Gorham where he graduated from Gorham High School in 1950. After high school, Warren graduated from Gorham State Teachers College and served his country as a MP in the United States Army. After his service Warren returned to Gorham and married his high school sweetheart, Mary Bachelder, and together they raised their son Bruce in the town they loved. Warren went into education in the Bonny Eagle School System where he was a middle school history teacher, athletic director and girls’ basketball and tennis coach. The gymnasium at Bonny Eagle middle school is named The Warren Murchie Gymnasium in honor of his thirty three years of dedicated teaching and coaching. Having this honor bestowed on him was one of his proudest moments. Warren was a history buff, an avid reader and had a huge passion for sports. Warren played basketball and baseball at Gorham High School and as an adult he belonged to bowling and softball leagues. He played golf and tennis well into his sixties. He followed his favorite athletes and teams from the pro level all the way down to the high school level. Warren touched the lives of countless young men and women not only at Bonny Eagle but also as a long time Little League coach in Gorham where he stressed sportsmanship and fundamentals. Above all else Warren was a family man, a great son, father, grandfather, great- grandfather, brother, husband and uncle. Though he cared deeply for all of his relatives, he had a special fondness for his grandchildren Derek and Samantha. Warren attended every game, event or school function they were a part of and he spent every holiday with them. After many years Warren reconnected with an old friend, Mary Graffam, in 1993. In March of 1994 they married, with that marriage, Warren was welcomed into Mary’s close and extended family. In addition to his parents Warren was predeceased by his brothers George and Harry. Warren leaves behind his loving wife Mary; son, Bruce; brother, Robert; grandchildren, Derek and Samantha and her husband Mark; great grandchildren, Hailey, Amelia, Harper and Dexter. Warren also leaves behind Mary’s children, grandchildren and great grandchildren as well as many nephews, nieces, and friends. Bruce would like to thank Mary for her love and devotion to my father, Susan and Tom Kelby for their tireless effort and help during my Dad's declining health; Rose and Lynn from Hospice for their amazing care; Wally and Debbie Nicholas for being such great neighbors and Lindy and Patti Murchie for their many many visits.

Warren Murchie, 87, of Standish, passed away on October 16th, 2020 with his loving wife by his side after a long battle with congestive heart failure. Warren was born in Center Conway; New Hampshire in 1933 the son of Byron and Mildred Murchie. As... View Obituary & Service Information

The family of Warren Murchie created this Life Tributes page to make it easy to share your memories.

Send flowers to the Murchie family.