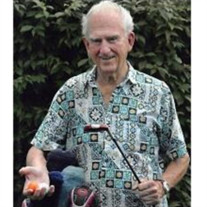 Warren (Peck) Gilman, 95, of Westbrook, ME, passed away peacefully on April 1, 2021 of natural causes. Warren was born on November 24, 1925 at his home in Portland, ME to Christine Peterson-Gilman and Charles H. Gilman. Warren grew up in Portland, eventually graduating from Deering High School only after serving in WWII in the Army Air Force. After returning home, he settled in Westbrook, ME. He later served in the Korean War, then retired from the National Guard. With a desire to learn how to fly, Dad earned his pilot’s license in 1946 and flew many times. Once, with his Uncle Albert, he flew from Martha’s Vineyard back to Portland, just to eat fried clams at his mother’s roadside restaurant named ‘Hi Neighbor’, on Bridgton Rd. in Westbrook. They landed in a field across the street, then casually walked over to the restaurant. Dad worked for 37 years as a Letter Carrier for the US Postal Service in Westbrook and retired in 1987. He enjoyed spending his summers with his family, at his camp that he built on Hancock Pond in Denmark, ME. He was very civic minded and was an active member of the Westbrook Lion’s Club and also of the Elk’s Club in Portland. He was an avid traveler and visited Hawaii three times, Malta in the Mediterranean, and frequented relatives in New Brunswick Canada. But his true passion in life was playing golf. He began playing golf in his early 30’s and picked it up quickly. He amassed many trophies over the years and even hit 4 holes-in-one. He hit his 4th hole-in-one at the age of 84, which garnered him both national and international coverage, even grabbing the attention of ESPN, who wrote an article about his feat. Dad deeply loved his family and close friends. He was predeceased by his first wife, Irene (Zaharis) Gilman, his second wife, Anna (Tiedwell) Gilman, his brother Bill Gilman, four step-siblings, and his dear friend Pauline Pickrell. He is survived by his children; Gayle and her husband Allin Grant, of Waterboro, Gary Gilman of Westbrook, Geordie Gilman of Westbrook, Gregory S. Gilman of Denmark, Gregory G. Gilman and his wife Christy Gilman of Boynton Beach FL., and Gwen Gilman of Portland. He is also survived by nine grandchildren, 10 great grandchildren, six great-great grandchildren, many nieces and nephews, and his very special friend Dolores Champagne, who meant so much to him and was always able to put a smile on his face and brighten his day with her presence. Dad passed peacefully in his sleep in the home he loved and lived in for over 62 years, on April 1, 2021. Visitation will be held on Tuesday, April 6th from 6pm-8pm at the Westbrook Chapel of Dolby, Blais & Segee. The funeral service will be held on Tuesday, April 20th, at 11:00am at the funeral home, with a burial to immediately follow at Woodlawn Cemetery in Westbrook.

Warren (Peck) Gilman, 95, of Westbrook, ME, passed away peacefully on April 1, 2021 of natural causes. Warren was born on November 24, 1925 at his home in Portland, ME to Christine Peterson-Gilman and Charles H. Gilman. Warren grew up in... View Obituary & Service Information

The family of Warren R. Gilman created this Life Tributes page to make it easy to share your memories.

Warren (Peck) Gilman, 95, of Westbrook, ME, passed away peacefully...

Send flowers to the Gilman family.