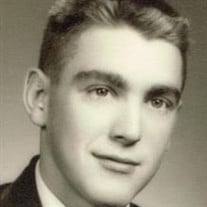 GORHAM - Walter Lorenzo Grant, Jr., 85, died February 28, 2022 at his home. He was born June 22, 1936 in Hollis Center, the son of Walter Lorenzo Grant, Sr. and Florence (Bradbury) Grant. Walter graduated from Hollis High School in 1954 and met his future wife, Susan Verrill, at one of the dance halls they both frequented. Walter and Susan married on July 20, 1956 and settled in Gorham. Walter served in the Marine Reserves for eight years. He was a member of the Windam-Gorham Rod and Gun Club and a lifelong member of the International Order of Odd Fellows. Walter worked as a foreman at Ellis Paperboard (later Rock 10) for 45 years. Walter was a hard worker, avid sportsman, family man and friend to many. He spent time hunting, fishing, camping, playing cards and “hanging out” with many friends and family including but not limited to, Kenny Hawkes, George Burnham, John Works and Johnny Files. Walter also enjoyed jigsaw puzzles, cribbage and watching the Red Sox, Celtics and the Patriots. Walter enjoyed monthly gatherings with The Bozos and passing time with friends at the Blue Moon. In addition to his parents, Walter was predeceased by his brother, Merton Grant. He is survived by his wife, Susan; children, Timothy, Peter and his wife, Laurie, and Kathi; grandchildren, Billy Grant and Andrea Thorne and her husband, Travis; granddaughter-in-law, Sharlotte Grant; great-grandchildren, Dakota, Sierra, Casey and Travis Timothy; siblings, Mary Neal and Owen Grant and his wife, Jeannie; and many nieces and nephews. A memorial service will be held 11 a.m., Thursday, March 10, 2022 at the Windham Chapel of Dolby, Blais & Segee, 434 River Rd. Donations in Walter’s memory may be sent to the Gorham Fire/Rescue Department, 270 Main St., Gorham, ME 04038 or Little Falls Bible Church, 746 Gray Rd., Gorham, ME 04038.

The family of Walter Lorenzo Grant Jr. created this Life Tributes page to make it easy to share your memories.

Send flowers to the Grant family.