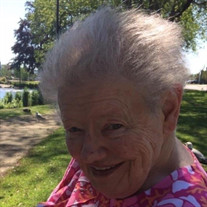 Veronica T. (Shields) Tergesen, 94, of Cape Elizabeth, was reunited with her husband and son in Heaven on March 18, 2022. She was born in Brooklyn, NY on June 12, 1927, where she was raised as one of six children of Francis J and Genevieve (Kirwan) Shields. Veronica (lovingly known as Ronnie) married the love of her life on May 16, 1953, Roy Tergesen. Together they moved to Levittown, New York, and then to North Branford, Connecticut where they adopted their 2 children. They returned to New York in 1967 and settled in Red Hook, where they raised their family, until they moved to Windham, Maine in 1978. Ronnie worked for many years as a telephone operator at several companies in NY, and later as a school bus driver, before retiring from Shop ‘n Save (Hannaford) Supermarkets in the early 1990s. She enjoyed traveling up and down the east coast with Roy in their motor home often stopping to visit relatives and friends along the way. Ronnie was an avid birdwatcher, and absolutely loved to read. Ronnie was a devout Catholic, and a valiant, compassionate woman. She was actively involved in the church as a lector, eucharistic minister and religious education teacher over the years. Her strong faith in God was a constant throughout her life. She was a wonderful caretaker, always putting other people’s needs before her own. Her smile and sense of humor were one of a kind and remained a part of her even throughout her battle with Alzheimer's disease. She is survived by her daughter, Kathryn (Kathy) Tergesen of South Portland, granddaughter Shandi Marie Tergesen of Saco, as well as many nieces and nephews who adored her. In addition to her parents, she was predeceased by her husband Roy Tergesen in 2018, son Christian (Chris) Tergesen in 2013, brothers Joseph and Francis Shields, sisters Dorothy (Dot) Pelletier, Genevieve (Vee) Emmell, and Mary Elizabeth (Betty) St. Jacques. The family would like to express their heartfelt thanks and appreciation to the staff at Cape Memory Care in Cape Elizabeth and the staff at Beacon Hospice for their kind and compassionate care of Ronnie. A Mass of Christian Burial will be celebrated on May 9, 2022 at 11:00AM at Our Lady of Perpetual Help, 919 Roosevelt Tr, Windham, ME. A graveside service will be held at 10:00AM on June 10, 2022 at the Southern Maine Memorial Veterans Cemetery 83 Stanley Road, Springvale, ME. Memorial donations in Ronnie's honor may be made to: Alzheimer's Association - Maine Chapter 383 U.S. Route 1, Suite 2C Scarborough, ME 04074 https://www.alz.org/maine

Veronica T. (Shields) Tergesen, 94, of Cape Elizabeth, was reunited with her husband and son in Heaven on March 18, 2022. She was born in Brooklyn, NY on June 12, 1927, where she was raised as one of six children of Francis J and Genevieve (Kirwan)... View Obituary & Service Information

The family of Veronica T. Tergesen created this Life Tributes page to make it easy to share your memories.