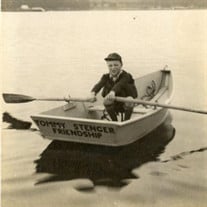 GORHAM - Thomas Elwood Stenger, 91, died early in the morning on Saturday, November 27, 2021 surrounded by the love of his family. The long battle he had fought with kidney disease finally came to an end. Tom was born in Friendship, Maine on February 5, 1930. His parents, Charles and Ida (Harrar) Stenger, from Philadelphia, had purchased a home and wharf on Friendship Harbor in 1928 to raise their family. Growing up in this small coastal town instilled a love of the water that remained with Tom all the days of his life. Tom graduated from Kents Hill School in 1949. He enlisted in the Navy in 1950 and after training spent most of his deployment as a Sonarman on the USS Coates. He saw a lot of the world while assigned to the Coates and told stories of those adventures for the rest of his life. After an Honorable Discharge in 1954, Tom began his career with GTE Sylvania. He worked for Sylvania in a variety of roles until his retirement in 1990. While home on leave from the Navy, Tom met the love of his life, Maxine Denbow. Tom and Maxine married in 1952. The early days of their marriage was spent in Friendship and at a variety of Naval Bases along the east coast. After Tom left the Navy, they made their home in Rockland until a promotion resulted in their move to Gorham where they lived for 52 years, raising their family of three. Tom was a dedicated family man and well known for his ability to fix or build almost anything. He remodeled their first home in Rockland and over the years made many improvements to the new home they bought in Gorham. To this day, the homes of his children and friends are graced with beautiful furniture that was lovingly made in Tom’s workshop. In spare time Tom enjoyed golf but really loved spending time on the water fishing from his boat. As his young son was growing up, Tom became actively involved in the Boy Scouts of America. He filled a number of roles during his years of service to the organization. Tom’s dedication to the Boy Scouts lead to him being honored as a recipient of the Silver Beaver Award which is awarded for distinguished service to young people within a BSA local council. Tom made some lifelong friends during his time in scouting. As proud as he was of the recognition he received, he was always prouder that his son had achieved the rank of Eagle Scout during the time Tom was involved with scouting. Tom is survived by his children, Jill (Peter) King, Thomas (Jayne) Stenger Jr, Amy Stenger Doyle; grandson Matthew Thomas Stenger; and his brother Robert L Stenger. He was predeceased by Maxine, his wife of 68 years, in January of 2021 as well as by his parents and his older brother, Charles. In these extraordinary times, the family would like to thank the wonderful staff at The Inn at Village Square for the dedicated and loving care they provided to Tom during his residence with them. At Tom’s request there will be no memorial services. If you would like to honor Tom’s memory, please consider making a donation to: Baxter Memorial Library, 71 South Street, Gorham, Maine 04038.

GORHAM - Thomas Elwood Stenger, 91, died early in the morning on Saturday, November 27, 2021 surrounded by the love of his family. The long battle he had fought with kidney disease finally came to an end. Tom was born in Friendship, Maine on... View Obituary & Service Information

The family of Thomas Elwood Stenger created this Life Tributes page to make it easy to share your memories.