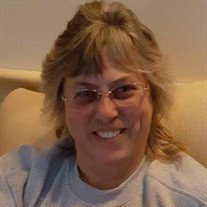 Westbrook - Terri Jean Hernandez (Cheverie), 55, of Westbrook, passed away Saturday July 17th, 2021 following a brief illness. Terri was born September 6, 1965 in Boston, MA to the late Douglas F. Cheverie and Janice l. Duran. She grew up and attended Stoughton schools. Terri was active in the Golden Rays Drum Corps with her siblings. After moving to Scarborough with her family in 1984, Terri, her sister Candis, and mother started two daycares which they owned for almost two decades. She worked as a caregiver for many years, and enjoyed helping others whenever she could. Terri was very devoted for years to a very dear friend, Barbara Wertz of Portland. Terri married her first husband in 1986 and raised three children while working full time. in 1999 Terri met Peter Hernandez, a mechanic, and later married in 2007. She enjoyed her many trips to the town spa for Linguicia Pizza and catching up with old friends. Her pride and joy was her family, especially her grandchildren. Terri enjoyed her vacations to Texas where she had a personal chef, Saul; and trips to California where she saw her favorite actors house, Sam Elliot. Terri is preceded in death by her father Douglas f. Cheverie, and her sister Robin l. Roberts. Terri is survived by her loving husband Peter Hernandez; son, Arthur Lounsbury Jr of NY; daughters, Annya Martin (tad) of South Portland and Lara Lounsbury of Portland; mother, Janice Benjamin of Portland; sister, Candis Tardiff (Patrick) of Raymond; brother, Douglas f. Cheverie Jr (Toni) of Lewiston; grandchildren, Ethan, Roselyn, James, and Norman of South Portland; nieces Lauren Messier of WI, Courtney Tardiff of Standish, and Danielle Tardiff of Naples; nephews, Matthew Braley of MA, Neal Roberts of Biddeford and Bryan Roberts of Naples; as well as many other loving family and friends. Visiting Hours will be held 2pm to 4pm on Friday July 23, at the Westbrook Chapel of Dolby Blais & Segee at 35 church street, Westbrook. A celebration of life will be held at 4pm immediately following the visiting hours.

The family of Terri Jean Hernandez created this Life Tributes page to make it easy to share your memories.

Send flowers to the Hernandez family.