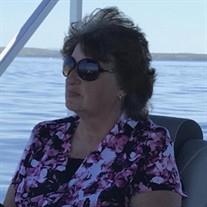 WESTBROOK - Susan Lajeunesse Brassard passed away unexpectedly of a pulmonary embolism on Tuesday morning, April 20, 2021 while at home. She was born at the Webber Hospital in Biddeford, the daughter of Richard and Doris (Turgeon) Lajeunesse. Susan graduated from Biddeford High School as a National Honor Society Scholar in 1974. She was called into medicine with her desire to care and help others and she became a proud graduate of Northeastern University in 1976 as a Registered Respiratory Therapist. Susan worked at Maine Medical Center for 17 years and she took great pride in her work. She rose through the ranks with respect from her peers and was proud to become Critical Care Supervisor for Pulmonary Medicine. After leaving MMC she went on to work at Brighton Medical Center. Upon leaving BMC she dedicated herself to raising our daughter, Kristine, her proudest and most charming achievement. As a lover of learning and medicine, Susan decided during this time to attend the University of Southern Maine, graduating from their four-year degree program as a Registered Nurse. Never one to slow down, she worked at various nursing homes and as a traveling RN for several years in the greater Portland area. Later, Susan retired to take care of her terminally-ill mother who had suffered a stroke. Over the next 18 months, Susan provided non-stop, dedicated, compassionate, and loving care for her mother in a way that many of us are still in awe of today! Susan met her husband, William A. Brassard on a blind date in 1976. It took four years but Will somehow cajoled Susan down the aisle on April 19, 1980. They celebrated their 41st Anniversary the day before she died. Will and Susan greatly enjoyed their time together during their 41 years of marriage. Both were blessed with a daughter, Kristine A. Brassard in August of 1991. Her birth brought enormous joy to both parents. One of Susan’s great hobbies was traveling and seeing the world. She would proudly want noted that she had visited four continents! While she enjoyed all her travels her favorite second home was Barbados; a spot she and Will truly loved. That said, London will always hold a special place in her heart because who doesn’t love Buckingham Palace and the Queen? When at home Susan was an avid gardener. Every year our home was bathed in the lovely colors from brilliant flowers. She diligently doted on, watered, and fertilized these flowers daily with spectacular results. In addition, Susan had a flare for decorating our home for each holiday season. Meticulously taking down various floral arrangements, statues, window decorations, matching holiday shower curtains (seriously), etc. the day after the holiday. Susan would then set up new decorations for the coming holiday. Much to her delight, friends and family marveled at her decorating abilities, especially during the holidays, when she hosted family and friends for Thanksgiving and Christmas dinners. Susan is survived by her husband, William A. Brassard; and daughter, Kristine A. Brassard; close family members, Andrew and Jacqueline Broaddus, as well as many other cousins and friends. A graveside service will be held on Thursday, May 13 at 10am at Woodlawn Cemetery in Westbrook. In lieu of flowers, please consider a donation to Ellie’s Legacy Animal Foundation at, https://elaf.giv.sh/.

WESTBROOK - Susan Lajeunesse Brassard passed away unexpectedly of a pulmonary embolism on Tuesday morning, April 20, 2021 while at home. She was born at the Webber Hospital in Biddeford, the daughter of Richard and Doris (Turgeon) Lajeunesse.... View Obituary & Service Information

The family of Susan Lajeunesse Brassard created this Life Tributes page to make it easy to share your memories.

Send flowers to the Brassard family.