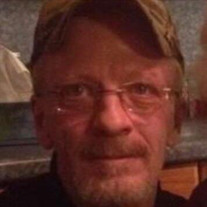 WINDHAM—Steven Ray Miles, 59, formerly of Evansville, Indiana, passed away June 30, 2020 at his home. He was born December 16, 1960, a son of Ray E. and Mary Ellen (Fox) Miles. He enlisted in the United States Navy right out of High School and was Honorably Discharged after many years of service. He was a Veteran of the Persian Gulf War; his shipmates knew him as “Peck”, and he was very proud of the many accomplishments he achieved while in the service. After the Navy, he worked in manufacturing for many years until his health declined. Steve was a patriotic man who was proud to be a Navy veteran and was a lifelong member of the NRA. Any time he could proudly wave the American Flag, he did. Steve was happiest while enjoying a cold PBR and watching his favorite football team, the Pittsburg Steelers. He is survived by his children, David (Shannon) Miles of Charleston, South Carolina, Erika (Dale) Spence, and Stefanie (Brian) Varner; grandchildren, Austin, Dillon, Skylar, Jayden, Anthony, Ethan, Chloe, and Ava; sisters, Becky (Dennis) Dekemper, Cheri (John) King, Kimmie (Chris) Reddington of Evansville, and Wendi (Darrel) Paul of Indianapolis; and he was known and loved as Uncle Bubby to all of his beloved nieces and nephews. He was preceded in death by his parents, Ray and Mary Ellen Miles, and a sister, Diana Rae. A Hero’s Welcome By Robert Longley Time to come home dear brother Your tour of duty through You’ve given as much as anyone Could be expected to do Just a few steps further The smoke will start to clear Others here will guide you You have no need of fear You have not failed your brothers You clearly gave it all And through your selfless actions Others will hear the call So take your place of honor Among those who have gone before And know you will be remembered For now and evermore The family will be holding a memorial service for him at Arlington National Cemetery at a later date. In lieu of flowers, please make donation’s in Steve’s name to the Wounded Warrior Project, https://support.woundedwarriorproject.org/default.aspx?tsid=10043&ovr_acv_id=4320. Arrangements are in the care of the Windham Chapel of Dolby Blais & Segee, 434 River Rd., Windham, ME 04062.

WINDHAM&#8212;Steven Ray Miles, 59, formerly of Evansville, Indiana, passed away June 30, 2020 at his home. He was born December 16, 1960, a son of Ray E. and Mary Ellen (Fox) Miles. He enlisted in the United States Navy right out of High School... View Obituary & Service Information

The family of Steven Ray Miles created this Life Tributes page to make it easy to share your memories.

Send flowers to the Miles family.