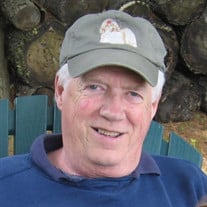 December 13, 2020 Dear Dad, Now that you have passed, strangely, we keep waiting for you to call, to hear your voice once more, and to tell us that all is indeed as was expected, even better! The Lord has embraced you and wrapped you in a most beautiful peace! But as much as that seems so logical and natural, as a father comforts his children throughout their lives when moments and events are so painful, our faith has allowed us to trust that all is 'ok', you don't have to make that call this time because we know it to be true. And we are happy for you. We are also so very grateful…. Hard to believe you were born on February 20, 1940 in the midst of a World War. Your first few years of life spent here in Maine, living on the old Stevens family farm, along with your Mom, Frances Louise, and your older brother Theodore "Ted". During this time, your father, James Page Cutler was truly and an "Officer and a gentleman" as he served in the US Navy and was part of combat operations in the Pacific theatre of WW II. As your adolescence waned and you slowly embrace adulthood, we appreciated the stories you'd occasionally share of your prep school adventures at Holderness, and College experiences at both Norwich University in Vermont and Boston University in Massachusetts. Of course, your summers were quite colorful during these years as you spent those on old Cape Cod, while your parents would host rather "extensive" social gathering at the family cottage in Harwich. But you could also play baseball! And you could pitch, having been scouted by the Boston Red Sox senior year at Holderness. Before casting for a professional career, we are so proud that you put it on hold to first and foremost, serve your country. (We still have some of your old olive-green US Army infantry shirts that we'd wear and play in when we were little.) After several years, some of which included time in the Army reserves and in the role of a Staff Sargant, you were honorably discharged, became a proud veteran, and it was time to find your permanent love, create a family and go to work! We're sorry your initial dream of a professional career in broadcast journalism didn't pan out. But we know it wasn't the result of failure, or for a lack of trying. You made the ultimate career sacrifice: supported your father's wishes that you embrace the business he was attached to; a funeral director at J.S. Waterman & Sons, Copley Square in Boston, and where your father was an owner. Ok, maybe not a glamorous career endeavor Dad, but an honorable profession, one you worked hard at, and were quite good at (a genuine talent for providing compassion with grieving families). Ultimately, your career in the funeral business spanned some 45 years. And in retrospect, this professional career decision was really the beginning of your single most significant attribute and what would define you later in life. You are selfless. As you joined your father's business, you also found the love of your life. Marrying your sweetheart, and a life partner for over 50 years; Joyce Carol Gazzaniga. And of course, that's where we came in, your two boys, Jeffrey Page and Jon Wingate. Despite what you'd often tell us, "I didn't have 2 nickels to rub together" during our early years, you always made sure there were Christmas gifts under the tree, birthday celebrations, new hockey skates when we needed them, an annual vacation week on Cape Cod each summer, and in lieu of money, you gave us your time. Of all sports, ice hockey was the one, and your coaching commitment while we played for the Natick Comets, including traveling squads, drives fond memories. Go Bruins! And yes, you did have two boys… boys who while fishing on the Cape took a baited minnow and cast it over to a hungry cat. The line held, you unhooked the poor critter, and your temper held. Thanks Dad. As the years rolled on, your love and commitment to Mom never wavered, your boys grew up, and became men thanks to you. And you continued to work hard. You always put us first, spoiled your grandkids, trips to Disney, boating on Sebago Lake and along the Southern Maine coast. Most significantly, you skipped your retirement in order to take care of your wife and her battle with Alzheimer's, which continues to this day. Emotionally and financially spent. But nicely done, Dad. Nicely done. Don't worry, we've not forgotten that old 1978 Red Jeep CJ 7 you so loved, and you somehow convinced Mom to let you buy while living on Cape Cod. It was your one and only guilty pleasure that let you parade around the dunes of the Cape. And while not a man of many hobbies, your enjoyment of golf and passion for Civil War history was well known to us. So much so, we're pretty confident that you were there, at Gettysburg and in some capacity back in July of 1863! Finally, at the end of this 80-year journey, you came full circle and did it with honor, integrity, sacrifice and love. Maine is where you are from, where it all began, and where you ended. At home. With much love. We miss you. Jeff & Jon Christine, Paige & Calvin Your brother Ted. And your wife, Joyce. Who you will once again have in your arms, and someday soon.

December 13, 2020 Dear Dad, Now that you have passed, strangely, we keep waiting for you to call, to hear your voice once more, and to tell us that all is indeed as was expected, even better! The Lord has embraced you and wrapped you in a... View Obituary & Service Information

The family of Steven W. Cutler created this Life Tributes page to make it easy to share your memories.

Now that you have passed, strangely,...

Send flowers to the Cutler family.