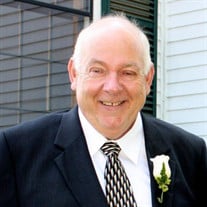 Stephen Michael Peters of Scarborough died unexpectedly at home with family nearby on March 2, 2021. He was born on May 20, 1950, the son of Charles and Elsie Peters of Gorham. He grew up in Gorham with a life that was anchored by family, work, and Christian faith. He was a loving, kind, and dependable son, brother, friend, and neighbor – always ready with a helping hand –usually accompanied by a joke. He graduated from Gorham High School in 1968. As a teen he was an active leader in youth activities of First Baptist Church in Portland. He attended Philadelphia College of Bible, where he met Gloria Susek, his bride-to-be. They were married on August 26, 1972. He transferred to University of Maine Portland-Gorham and graduated in 1973 with a Bachelor of Arts degree in psychology. Steve went into the Peters Family construction business and worked in the Greater Portland area for 45 years, building more than 100 new family homes. He also built and managed rental properties. In 1973 Steve and Gloria made their home in the first house he built, in Cape Elizabeth. They resided in Cape Elizabeth for 42 years before retiring in Scarborough in 2016. In keeping with family tradition, Steve loved to take his children and grandchildren to the job, teaching them building and business skills along with his strong work ethic. Younger family members treasure memories of sitting on the board pile enjoying chocolate milk and donuts at various building sites. Steve and Gloria were proud that their son Aaron who followed Steve into the construction business. Even more than teaching his children skills and initiative by word and example, Stephen taught them to center their lives on Christ. Family and faith were the bedrock of Steve’s life. He was closely involved in his children’s lives and valued opportunities for family fun and growth together. He learned to snow ski and water ski so he could teach his children and spend time with them in these family activities. He also volunteered to coach their sports teams as young children. Together with Gloria he loved spending time with the extended family, too, and was a devoted son, brother, and uncle as well as a dedicated husband, father, and grandfather. He was never happier than during a family day on the lake or when hosting a big, noisy family get-together. Steve was a doer, not a sit-and-watcher, up at dawn and eager for each busy day. As he often said, “Sooner is better than later.” He was active in the community during his years raising his family in Cape Elizabeth. He joined the Cape Elizabeth Fire/Rescue squad as a driver for rescue in 1999, soon became a basic EMT and was elected Captain of the rescue squad from 2008 to 2014. He joined as an opportunity to serve his community and work alongside his son Joshua and daughter Sarah. He greatly enjoyed spending time with them on the rescue squad. He was very proud of Joshua and Sarah for both becoming nurses, following their interest in the medical field started by their time on the rescue. Throughout his life Steve shared his passion for Christ, his integrity, his work ethic and his sense of humor. Stephen was a spiritual leader at home and in the church, where he served as a Sunday school teacher, youth leader, deacon, and then an elder at Second Parish Presbyterian Church for many years. For more than ten years he has been a member at Christ the Redeemer Presbyterian Church where he has been an active elder and was a key leader in helping steer the church through a difficult time of transition. He was especially devoted to the growth in Christ of children, and made it his personal mission to faithfully send birthday cards to children of the church. A strong, kind, loyal, generous man, Stephen took joy in helping others. He was a prankster and loved to joke and laugh. He will be dearly missed and lovingly remembered. Steve is survived by his wife of 48 years, Gloria Susek Peters; son Joshua Peters, his wife Morgan Gould Peters, and their children Charlie, Madeline, and Andrew, of Windham; son Aaron Peters, his wife Rebecca Avery Peters, and their children Lydia and Lucas, of Gorham, and daughter Sarah Peters of Gorham. Steve was the oldest of six children. He was preceded in death by his brother Daniel Peters and is survived by brother John Peters; sisters Rebecca Peters-Campbell, Ann Jewett, and Ruth Peters; nephews and nieces Ian and Eve Peters-Campbell, Thomas and Warren Peters, Benjamin Jewett, and Daniella Peters; and by sisters- and brothers-in-law Lois and Frank Kane and Rev. Ronald and Diane Susek. Though Steve will be missed daily in too many ways to tell, his family is grateful that we "grieve not as those without hope" (1 Thessalonians 4:13) because we are confident that "absent from the body [he is] present with the Lord" (2 Corinthians 5:8). We rejoice in the Christian hope that he is now with his Savior Jesus who has defeated death, and that we will see Steve again. Throughout life’s successes and challenges he was defined by the grace of God who was with him always (Matthew 28:20) and who faithfully holds him close. A memorial Service will be held at 11 A.M. on March 9, 2021, at Dolby, Blais & Segee Funeral Home, 434 River Road, Windham, Maine, by invitation only due to COVID-19 protocols. Refreshments to follow. Livestream of the service will be available to all who others wish to attend using the Zoom link listed below. If you wish, a donation may be made to the Deacon's Fund at Christ the Redeemer Presbyterian Church in lieu of flowers: Deacon’s Fund, Christ the Redeemer Church, 1364 Washington Avenue, Portland, Maine 04103. You are invited to a Zoom webinar. When: Mar 9, 2021 11:00 AM Eastern Time (US and Canada) Topic: Stephen Peters Funeral Service Please click the link below to join the webinar: https://zoom.us/j/93723440491

Stephen Michael Peters of Scarborough died unexpectedly at home with family nearby on March 2, 2021. He was born on May 20, 1950, the son of Charles and Elsie Peters of Gorham. He grew up in Gorham with a life that was anchored by family, work,... View Obituary & Service Information

The family of Stephen Michael Peters created this Life Tributes page to make it easy to share your memories.

Send flowers to the Peters family.