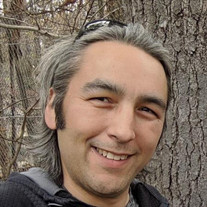 CLIFTON – Stephen Berry, 39, died at home with his family – snuggled with his toddler daughter - in Clifton on December13th, 2020. He was born to Stephen Paul Berry, Sr. and Marlene (Nason) Berry on February 27, 1981, in Ellsworth, Maine. Raised on Jasper Beach in Machiasport, he was a 1999 graduate of Washington Academy. After studying art at the University of Southern Maine, he explored several intriguing occupations before perfectly fitting into his technical role at the Center for Advanced Structures and Composites at the University of Maine’s School of Engineering. Stephen viewed life from an artist’s perspective – often with a twist of whimsey – and his creative impulses are evident in Bowie’s artistic development. Little Rin’s neurolinguistic development was spurred by learning the names of dozens of exotic fish in Stephen’s many tanks. His devoted friends found him funny, kind and loveable. To know Stephen was to find joy in his presence, which Willow intuited when they met at fourteen. A hard worker and committed provider to his treasured “girls” - including wife and mother - since 2007 Stephen had worked at UM’s Composites Center, where he gained both skills and respect. In a sense he also found his second family, in a stimulating and collegial environment. Their concern and support were greatly appreciated by his bio-family as he endured two open heart surgeries in 2019. Stephen was predeceased by: his father; his grandmother, Elsie Nason; and his aunt, Melanie Nason, all within the past five years. In addition to his mother, he is survived by his partner and wife of 15 years, Nicolette Willow Yerxa. He is the father of two creative and intelligent daughters, Bowie Maeve Berry (10) and Rin Raven Berry (3), to whom he was devoted. Also surviving are: his sister, Niomi, her husband Andrew Tipton and their children Indigo Lawrence, Darian Lawrence, Allura Tipton and Lorelei Tipton of Blue Ridge, Georgia; his aunt Agnes Heithecker, her husband Todd and nephews Neal and Austin Wright of Texas; his uncle Daniel Berry and son David Berry of Washington; his maternal uncles Stephen Nason and Sandy Nason. As well as numerous cousins. In-laws Mary Dunn and Stuart Shotwell of Cooper; Teresa Gregory and Bo Yerxa of Waldoboro; Shyla Yerxa, Nik Cody and their son Sylvan Cody of Belfast. Special Auntie Liz who loves our girls. All of whom loved him and all that he was as if he was blood. His art teacher wrote in his high school year book that he was divergent. He was creative in art and in problem solving, Many said recently he just saw the world a different way and that was so often a delightful joyful part of who he was. Being a father to his girls has been the things he was definitely the best at and his favorite role yet. Stephen was buried Saturday, December 19, in a forest glade by the Penobscot River per his wishes. In a nod to his heritage (his father was born a Native Aleutian on Saint Paul Island, Alaska), he chose interment unadorned, in a simple pine box. His family sincerely thanks Stephen’s (& Willow’s) W.A. classmate, Eric Segee, for his exceptional support and generosity in helping Willow execute these final wishes with poise and grace. We are humbled and lifted up, not only by the compassion of family, life-long friends and others who Stephen’s life touched over the not quite forty years, but by the unexpected caring and support from those we’ve never met. Thank you all! There will be a Celebration of Stephen’s Life when it is safe to do so, likely in the Summer of 2021. We love and miss you so much already Stephen.

The family of Stephen P Berry Jr created this Life Tributes page to make it easy to share your memories.

CLIFTON – Stephen Berry, 39, died at home with his family – snuggled...

Send flowers to the Berry family.