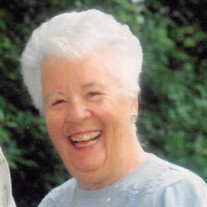 GORHAM - Shirley W. Swain passed away from recent health issues on December 11, 2021, just short of her 89th birthday. Born in Stoneham, MA on December 14, 1932, she was the daughter of Robert A. Wills and Ruth (Moody) Wills. She was raised in Stoneham, graduated from Stoneham High School, and went on to graduate from Farmington State Teachers College in Farmington ME, the town where she met George Swain, her husband of 68 years. After teaching in Stoneham for a short period, Shirley and George made their home in Gorham, ME where she continued to teach third grade in the Gorham School System, first at the Millett School and retiring after thirty years from Narragansett Elementary School. As a young family, they could be found fishing and snowmobiling in the Langtown-Eustis area where the family rustic camp is located. Later, she and George travelled by RV through the northern states to Canada and Alaska and spent a number of winters at Lake Bonnet RV Resort, FL. Shirley was a recognized member of Alpha Delta Kappa Sorority, receiving a Thirty-Five Year Award this past summer. Shirley enjoyed sports, playing golf and was a big fan of the Boston Red Sox and New England Patriots. She took pleasure in hand crafts: knitting Afghans, hats, and mittens, along with making attractive quilts, all of which were widely distributed among family and friends. She enjoyed painting scenery and flower depictions in watercolor and other medium. Playing cards and dominos with friends was an entertaining pass time. Shirley tended George’s gardens by preparing an immense gathering of vegetables every year; by canning and preserving jams and jellies, and making the best pickles. She was known for always, a banana cream pie on holidays. In addition to her parents, Shirley was predeceased by her two sisters, Joan Mouton and Robin Scott. She is survived by her husband, George R. Swain; their daughter, Terryll Ann and partner, Judith, of Windham, ME; their son, Gregory Andrew and partner, Bernadette, of Gorham, ME; sister, Betsy Wills of Exeter, NH; two granddaughters, Veronica Swain and her husband, Dave of Easton, CT, and Ashley Locke and her husband, Dr. Damon Locke of Riverside, MO; and grandson, Robert Swain and his wife, Jennifer of Wells, ME. She leaves her seven great-grandchildren, Violet Selzer-Swain, Caroline and Lorelai Locke, and Gemma, Logan, Lena and Everly Swain; her two nephews, Kenneth Risch and wife, Janet, and Hans Risch and wife, Tammy; two grandnieces, Naomi Risch and Cassie Rowe; brother in-law, Douglas Scott; and her extended family of cousins and friends. Wife, mother, grandmother, great-grandmother, sister, aunt, cousin, friend; she is cherished. A memorial celebration of Shirley’s life will follow the summer of 2022. In lieu of flowers, donations in Shirley’s name may be made to Amedisys Foundation 52 Atlantic Place, South Portland Me 04106, or The Iris Network, 189 Park Avenue, Portland ME 04102. The family would like to extend their deepest gratitude to The Gorham House and Beacon Hospice for the loving care and support given to Shirley and her family.

GORHAM - Shirley W. Swain passed away from recent health issues on December 11, 2021, just short of her 89th birthday. Born in Stoneham, MA on December 14, 1932, she was the daughter of Robert A. Wills and Ruth (Moody) Wills. She was raised... View Obituary & Service Information

The family of Shirley W. Swain created this Life Tributes page to make it easy to share your memories.