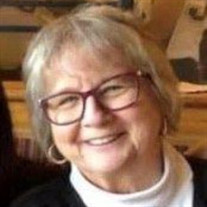 GORHAM - Sharon Lee Rumery, 71, of Gorham passed away peacefully on July 25th 2021 at her home in Gorham after a brief battle against Cancer. She was born on April 19th, 1950, in Portland. She was the daughter of Robert Linwood Jordan and Barbara Ann Jordan. Sharon had three brothers, Robert, Glenn, and Peter Jordan. She graduated from Deering High School in 1968. Surviving Sharon is her husband, Allen Rumery; her son and daughter; Larry Scola and Leanne Williams and granddaughter, Jordan Williams. Sharon had an unmatched competitive nature and desire to show her best. Whether it was her candlepin bowling league, cribbage match, fantasy football team (2020 champion), final four bracket challenge (2019 champion) or a family game of Scat, she played to win. She would even race the person beside her donating blood. She loved motorcycle rides with Al and bass fishing at their secret fishing holes. Sharon enjoyed roller skating at Happy Wheels, taking the kids or adult skating with her best friend, Paulette. Sharon cherished her time spent at the river with her family and kayaking. What she didn’t love was getting stuck on the tree stump, while her brothers just watched. Great stories to tell now .... Sharon also enjoyed coaching and managing her three brother’s softball teams. In the mid 80’s, Sharon became the 1st women manager in the Portland Men’s Softball league. She took great pride in managing all her teams and enjoyed the friendship of all the players and their families. She took the 1985 “The Stic” team to the Maine State Districts and the team finished in 2nd place. The team then qualified for the Maine State tournament in Presque Isle and the team finished in 3rd place. In 1986 “The Stic” team won their Portland softball league division. The Hannaford Bros Co teams also did very well in their Distract tournaments throughout the following years. All her teams liked to play in the Pine Tree Society charity games and liked to travel to city tournaments in Brunswick, South Portland, and Waterboro. She must have managed over 100 players during her softball manager career and got along with all the opposing teams, league directors (Steve W and Gary A) and umpires (except Everett Butts)...! I’m sure she’s already putting together a team with her dad in her next life. She was the den leader of Larry’s cub scout pack. She loved her yearly hikes up Pleasant Mountain with Larry. Sundays were for shopping and going out to eat with Leanne and Jordan. She always looked forward to Leanne's birthday to head out for an indoor waterpark adventure. Sharon worked over 20 years at Anthem Blue Cross/Blue Shield. She began her career at the switchboard. Then she advanced to Provider Relations Representative and was quickly promoted to supervise the department. She moved to the Enhanced Voice Response department and traveled around the country setting up call systems for other branches. Sharon was also Employee of the Year at Better Fit Fitness Center 2018 and 2019. Her family would like to thank Dr. Bien’s team of doctors during her cancer battle. If you met Sharon, you instantly liked her. If you knew Sharon, you loved her forever. Services will be private.

GORHAM - Sharon Lee Rumery, 71, of Gorham passed away peacefully on July 25th 2021 at her home in Gorham after a brief battle against Cancer. She was born on April 19th, 1950, in Portland. She was the daughter of Robert Linwood Jordan and... View Obituary & Service Information

The family of Sharon Lee Rumery created this Life Tributes page to make it easy to share your memories.

Send flowers to the Rumery family.