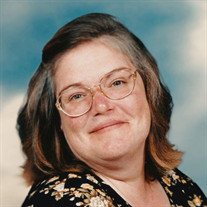 Sharon Jeanne (Dyer) Gaudette, 65, of Westbrook died Saturday, May 15, 2021, after a period of failing health. She was born in Portland Feb. 4, 1956, daughter of the late Norman and Esther (Cross) Dyer, and graduated from Westbrook High School in 1974. Sharon worked in food service at Maine Medical Center in Portland for over 40 years before retiring earlier this year. She is remembered for her lively good spirits and selfless devotion to family and friends. At summer parties she was more often than not found next to the grill, cooking implements in hand, making sure everyone had something tasty to eat. She loved mysteries, whether in books or on TV, and had a special place in her heart for Magnum PI. Sharon was married for 35 years to the late Arthur “Butch” Gaudette Jr., with whom she shared many nights on the town, and later, summer camping trips, evenings at the races, and family time with their daughters. She will be dearly missed by her family: daughters Briana Gaudette of Westbrook; Danielle Gaudette of Portland and partner Bret Taylor; three brothers, Brian Dyer of Buxton and wife Shelbie, Richard Dyer of Buxton, and Christopher Dyer of Scarborough and wife Laurel; a sister, Theresa Dyer Bakker of Standish and husband Scott; niece Laura Dyer; nephews Timothy, Ross, and Matthew Dyer; Matthew’s wife Libby Dyer and their children Matthew, Zoe, Elias, and Allistair Dyer; and sister-in-law Dorothy Gaudette of Westbrook. Visitation will be held on Saturday, May 29, 2021 from 11:00am to 1:00pm at Dolby Blais & Segee in Westbrook followed by a funeral service at 1:00pm. A committal service will take place on Tuesday, June 1 at 11:00am at Woodlawn Cemetery. The family encourages you to share memories of Sharon on the tribute wall.

Sharon Jeanne (Dyer) Gaudette, 65, of Westbrook died Saturday, May 15, 2021, after a period of failing health. She was born in Portland Feb. 4, 1956, daughter of the late Norman and Esther (Cross) Dyer, and graduated from Westbrook High School... View Obituary & Service Information

The family of Sharon Jeanne Gaudette created this Life Tributes page to make it easy to share your memories.

Send flowers to the Gaudette family.