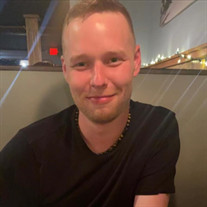 Westbrook Scott Timothy Moody, 32, passed away unexpectedly on October 12, 2021. He was born on March 20, 1989 in Portland, Maine, the eldest son of Kristine (Francoeur) Moody and Timothy Moody. He was a lifelong Westbrook resident and a 2008 graduate of Westbrook High School. Following graduation Scott worked for various companies and was excited about his latest opportunity with Spectrum. He enjoyed working with customers as a member of their sales team. He took pride in achieving independence and being able to provide for his family. Scott had a big heart and was known for his thoughtfulness, generosity and willingness to help anyone in need. Family topped the list of what was most important to him. Time spent with grandparents, brothers, cousins, aunts and uncles (particularly his Aunt Nancy who was undoubtedly his favorite) was always the best. He loved celebrating holidays, especially Christmas, focused on traditions and making lasting memories. Holidays and family time became even more meaningful with the birth of his son, Silas. Becoming a father was one of Scott's proudest accomplishments and Silas made Scott's life complete. He was looking forward to raising Silas with his fiance', Sarah and building their life together. The strong love for family that Scott had was rivaled only by the love he had for pets. He cared for animals of all kinds over the years and would rescue and adopt any chance he could. It gave him great joy to be able to make a difference for those that needed him. Scott was predeceased by his grandfather, Bertrand Francoeur. Surviving him in addition to his parents are his grandparents, Judith Francoeur and Laura and Merton Moody Jr, his fiance', Sarah Spaulding, his son, Silas Earle Moody, brothers Matthew Moody, and partner Courtney Brown, Kevin Moody and his partner Karissa Pooler, Aunt Nancy Sargent and her husband Steve, Uncle Mike Francoeur and his wife Cathy, Uncle Tom Moody and his wife Lisa, Aunt Anna Falconeri and her husband Joe, Aunt Amy Moody and cousins Jordan and Jake Mello, Ryan Sargent, Shawn Francoeur, Joe Francoeur, Meaghan Moody, Jessica Moody, Joey Falconeri and Anthony Falconeri. Scott's extended family also includes many great aunts and uncles, family and friends. Scott had a lot of people who were special to him which we can't name them all but a special mention to Brittani Gannon a lifelong friend and Chelsea Preston a childhood friend. Visiting hours will be held 5-7 p.m. Friday, October 22nd at Westbrook Chapel of Dolby, Blais & Segee 35 Church Street, Westbrook. A Mass of Christian Burial will be celebrated on Saturday, October 23rd at St. Anthony of Padua Parish, St. Hyacinth Church 268 Brown Street, Westbrook. Interment follow at St Hyacinth's Cemetery. Those wishing to celebrate Scotts life are invited to a reception following the burial at the American Legion, 300 Conant Street, Westbrook. In lieu of flowers donations can be made to the Animal Refuge League of Greater Portland 217 Landing Road, Westbrook, Maine 04092.

Westbrook Scott Timothy Moody, 32, passed away unexpectedly on October 12, 2021. He was born on March 20, 1989 in Portland, Maine, the eldest son of Kristine (Francoeur) Moody and Timothy Moody. He was a lifelong Westbrook resident and a... View Obituary & Service Information

The family of Scott T. Moody created this Life Tributes page to make it easy to share your memories.

Send flowers to the Moody family.