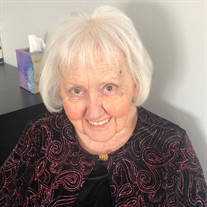 Sara Louise Burns WINDHAM – Sara L. Burns 83, died November 18, 2020 at home surrounded by her family. She was born February 23, 1937, in Big Springs, Ohio and grew up in Cincinnati, Ohio. She worked as a waitress in Ohio and later owned and operated her own beauty salon in Marion Ohio. She taught cosmetology students the art of make up application and modeled for Vivian Woodard Cosmetics. She married the love of her life LeRoy Burns on February 5, 1969 and they moved to Maine in 1982. Shortly after moving to Maine, she became a CNA and worked in several nursing homes in the area. She loved to travel the world. She traveled to India 7 times, Thailand 3 times, Greece and Scotland as well as traveling throughout the United States. She loved spending time with her family as well as her church family. In 1993 she moved to Florida where she lived until 2002 when her husband LeRoy Burns passed away at which time she moved back to Maine to be close to her daughters. She is predeceased by her husband LeRoy Fred Matson Burns III and great granddaughter Lena Rose. Surviving are her children, son Terry Burns and his wife Norma Burns of Virginia, son Timothy Heid and his wife Jan Heid of Thailand, daughter Tammy Burns of South Carolina, daughter Melissa Graham and her husband Alan Graham of Windham, Maine, daughter Robin Burns and her husband James Colman of Dixfield, Maine, daughter Heather Small and her partner Paul Robert of Bowdoinham, Maine; fifteen grandchildren and twenty one great grandchildren. A visitation will be held on Monday, November, 23, 2020 from 9:30 to 10:30 at Grace Bible Church, 74 Deering Road, Gorham, Maine. A celebration of life will be held at 11:00 at the church. Due to Covid restrictions, once capacity of 50 people has been reached, a live stream of the service will be available on Grace Bible’s Facebook Page. A committal service will be held at 2pm at Mayberry Cemetery, Park Rd., Windham, Maine. Arrangements are in the care of the Windham Chapel of Dolby Blais & Segee, 434 River Rd., Windham, ME 04062.

Sara Louise Burns WINDHAM &#8211; Sara L. Burns 83, died November 18, 2020 at home surrounded by her family. She was born February 23, 1937, in Big Springs, Ohio and grew up in Cincinnati, Ohio. She worked as a waitress in Ohio and later... View Obituary & Service Information

The family of Sara Louise Burns created this Life Tributes page to make it easy to share your memories.

Send flowers to the Burns family.