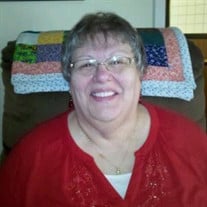 EAST BALDWIN - Sandra “Sandy” Buzzell Boyce Franklyn, 75, of East Baldwin passed away on July 17, 2021 surrounded by her loving family. Sandy was born on April 06, 1946 to Avon and Ursel Buzzell, the youngest of their four children and only daughter. Sandy became friends with Glenice Boyce St. Peter in 1964 who introduced Sandy to her brother, Galen Boyce. The two fell in love and were married in March of 1965. Sandy and Galen only had a short 6 years together before he passed away in 1971. On July 14, 1973, Sandy married her childhood friend, Russell “Rusty” Franklyn, Jr. They were married for a wonderful, happy and loving 48 years and had 3 children, Galen Boyce Franklyn, Kristi Smith and Rebecca Franklyn. Sandy has been described as a “rare gem”. She was, and will always be, well loved by everyone who met her due to her immense loving personality and infectious laughter. She accepted everyone in her life with unfailing love. She was a fiercely dedicated mom to her three children and all the children she unofficially adopted throughout her life. Family came first above all else to Sandy and she encouraged this value to those around her. The hole left by her absence is impossible to fill. Sandy was predeceased by her parents, Avon and Ursel Buzzell; brother, Hugh Buzzell, and her first husband, Galen Boyce. She is survived by her husband, Rusty Franklyn, Jr.; and her 3 children, Galen Boyce Franklyn and his wife Lorie Franklyn, Kristi Smith and Rebecca Franklyn; her only grandson, whom she loved greatly, Tyler Smith; her brothers, Avon and Sidney Buzzell and many, many nieces, nephews and cousins. In lieu of flowers, please consider a donation in Sandy’s name to Steep Falls Country Church Community Kitchen, 35 Main Street, Steep Falls, ME 04085. Service/celebration of life will be announced at a later date.

EAST BALDWIN - Sandra &#8220;Sandy&#8221; Buzzell Boyce Franklyn, 75, of East Baldwin passed away on July 17, 2021 surrounded by her loving family. Sandy was born on April 06, 1946 to Avon and Ursel Buzzell, the youngest of their four children... View Obituary & Service Information

The family of Sandra May Franklyn created this Life Tributes page to make it easy to share your memories.

Send flowers to the Franklyn family.