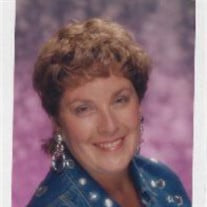 Sandi Jean McKenna Earles Merrill, 75, of Westbrook, passed away at the Barron Center on September 12, 2021, after a long battle with Parkinson’s disease. She was born on April 20, 1946 in Portland to parents Donald and Virginia (Jackson) McKenna. She graduated from Westbrook High School in 1964 and went on to Maine Medical Center’s School of X Ray Technology, getting her certification in 1966. She worked at Maine Medical Center until she started a family with her first husband, David Earles. Together they had three sons, but David lost his battle to cancer early in their marriage. Sandi went on to marry George Merrill on October 11, 1975. George adopted her three boys and once they were all in school Sandi went to work in the Scarborough School lunch program so that she could be home when they were. She always worked doing things she loved-especially her last job as a secretary at Thornton Heights United Methodist Church. Sandi was a people person and helping others was her passion. She volunteered at the Wayside Evening Soup Kitchen, and volunteered doing respite care. Later on Sandi was a part of a Parkinson’s support group, where she met many friends and was surely a light in the darkness for other members of the group. Fellowship was also high on her list. She was always making the beans and baking the biscuits at monthly bean suppers, cooking for potlucks and tried not to miss game night or Tea Party groups. Sandi was a very crafty lady; in her spare time, she enjoyed doing ceramics – she was especially proud of her nativity scene- she was a talented quilter and taught quilting classes to others. She loved sharing her labors of love with friends and family. She donated several of her blankets to the Linus Project as well. Sandi loved preparing food for those she loved. She will be remembered for baking “Jesus’s Birthday Cake” and looked forward to it every year. Any special occasions, birthdays and holidays Sandi loved stamping. You knew when you received a card from her that it would be made just for you. For 25 years Sandi volunteered with the Crusade Capers, a variety show that benefitted the American Cancer Society. She worked behind the scenes building scenery, making costumes, and anywhere else she could lend a hand or her talents. This connection led to over 25 years of a candlepin bowling league with the people she met there and the rest of “The Bates Street Gang”. Sandi lived her life surrounded with love and warmth and bound with threads of strength and hope. Sandi and George made close friends in Bruce Arseneault, Larry Ross and their families; calling themselves all “The Bates Street Gang” in homage to the street Larry lived on. This small community of friends was like a second family for the two of them and their children. In the Summer in Yarmouth, they would all park their cars at Bates Street and walk down to the Clam Festival, watch fireworks after they’ve been in the parade- and have some clams, dough boys and pink lemonade. Sandi always looked forward to their time together at the festival as well as their annual Christmas party. In Yarmouth there were also annual trips to a hunting camp in Eustis. Typically, this trip was just for the guys- until Sandi came along. Even though she didn’t hunt she enjoyed the time spent together. She would always find a way to get the other mothers to coming along on scouting trips as well, once to Baxter State Park. Sandi is survived by her honey of 45 years; sons Mark, and his wife Laurie, of South Portland, Dan, and his wife Tina, of Westbrook; brother, Jay, and his companion Cynthia, of Windham; sister, Bette, and her husband Ronald, of Wyoming; brother, Ken, and his wife Margot, of Virginia; sister, Carolyn of Georgia; grandchildren, Britney, Jacquelyn, Stephanie, Daniel and Paige; great grandchildren, Evan, Simon, Sophie and Roland, and many nieces, nephews and friends. Sandi also leaves behind her church family who was so important to her especially in her more recent years. She was predeceased by her parents; sister, Donnie, and sons Thomas and Marty. The family would like to send many thanks to the Barron Center and Compassus Hospice for their care and compassion during her last days. A graveside service will be held on Thursday, September 23 at 10AM at Brooklawn Memorial Cemetery, 2002 Congress St., Portland, Maine. Following the service will be a Celebration of Life at Thornton Heights UMC, 100 Westbrook St., South Portland, Maine. Both will be officiated by Rev. Kathleen H N Towns. In lieu of flowers, donations can be made to: Thornton heights UMC or Parkinson’s Association of Maine.

Sandi Jean McKenna Earles Merrill, 75, of Westbrook, passed away at the Barron Center on September 12, 2021, after a long battle with Parkinson&#8217;s disease. She was born on April 20, 1946 in Portland to parents Donald and Virginia (Jackson)... View Obituary & Service Information

The family of Sandi Jean Merrill created this Life Tributes page to make it easy to share your memories.

Send flowers to the Merrill family.