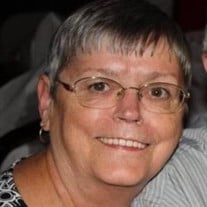 Westbrook - Sally Ann Maxim, 74 of Westbrook passed away Tuesday, June 16, at Gosnell Memorial Hospice House after a long illness. She was born on December 27, 1944 in Portland to Alton Hurd and Marie (Lewis) Hurd. Sally grew up in Westbrook and graduated from Westbrook High School in 1963. She married Ronald Maxim and was married for 53 years. Sally worked at Forest City Chevrolet in Portland along with her husband for 32 years. In her younger days she loved boating, water skiing, snowmobiling and gardening. She also loved all forms of crafts. She especially loved knitting and making beautiful braided rugs. She had a room in her home that was dedicated to her crafts. Sally created her own designs and could replicate anything made by someone else just by looking at it. Family was important to Sally, especially hosting Christmas gatherings. Sally was pre deceased by her parents, Alton and Marie and her brother Stephen Hurd. Sally is survived by her husband, Ronald of Westbrook, sister Donalene (Wayne) Nelsen of Falmouth, brother Carlton (Carol) Hurd of Westbrook, and sister Delores (Skip) Robinson of Windham, sister in law Lori (Steve) Anthony of Cornish. Sally loved her nieces, Kathleen and Jayne Bragdon, and Karyn Nelsen, and her nephew Don (Linda) Bragdon and all of their children, grandchildren and great great-grandchildren, she loved spending time with them at family functions. Sally is also survived by her step children, Lynn (Wayne) Chick of Westbrook, Laurie (Richard) Bisson of Woolwich, Luanne (Ray) White and their children and grandchildren. The family would like to thank Sally’s caregivers at Portland Gastroenterology, and the Gosnell Hospice House and Mitzi Duss. A Graveside Service will be held 11:00AM on Wednesday, June 24 at Pine Grove Cemetery, 9 Waites Landing Rd, Falmouth.

Westbrook - Sally Ann Maxim, 74 of Westbrook passed away Tuesday, June 16, at Gosnell Memorial Hospice House after a long illness. She was born on December 27, 1944 in Portland to Alton Hurd and Marie (Lewis) Hurd. Sally grew up in Westbrook... View Obituary & Service Information

The family of Sally Ann Maxim created this Life Tributes page to make it easy to share your memories.

Send flowers to the Maxim family.