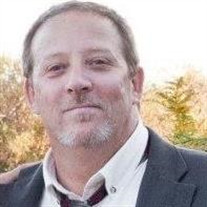 HARRISON—Ryan Russell Richard, 54, passed away July 11, 2020 at his residence in Harrison. He was born August 28, 1965, a son of Lawrence Richard and Judith (Cousins) Rand. Ryan grew up in Westbrook and attended schools locally. Immediately following school, he began working at SD Warren as a paper maker for many years until his accident at the mill in 1997. Although complicated health following the accident left Ryan unable to work, he always maintained a good attitude and enjoyed life to the fullest. Ryan was happiest when surrounded by his family and friends. He enjoyed riding his Harley and being outside, weather that was camping, boating, swimming or fishing. He could often be seen tinkering on one of his many ongoing projects or working in the yard. He will be remembered for his kind heart, easygoing personality, and just an all-around fun person. He was predeceased by his son, Gary Lee Richard. He is survived by his mother, Judith Rand and her husband, Dr. J. Chase Rand; his father Lawrence Richard; his daughter, Samantha Richard; grandson, Camryn Greenwood; longtime partner, Tinamarie Smith; siblings, Darin Richard and his wife Janelle, Lawrence Richard Jr., and Michelle Bouthiet; step children, Christina Smith, Nicole Roszka, and Justin Smith; nephews Connor Richard and Gideon Richard. The family is holding a private service and a celebration of life will be announced at a later date. In lieu of flowers, memorial donations in Ryan’s name may be made to: Camp Sunshine, 35 Acadia Rd., Casco, ME 04015. Arrangements are in the care of the Windham Chapel of Dolby Blais & Segee, 434 River Rd., Windham, ME 04062.

HARRISON&#8212;Ryan Russell Richard, 54, passed away July 11, 2020 at his residence in Harrison. He was born August 28, 1965, a son of Lawrence Richard and Judith (Cousins) Rand. Ryan grew up in Westbrook and attended schools locally. Immediately... View Obituary & Service Information

The family of Ryan Russell Richard created this Life Tributes page to make it easy to share your memories.