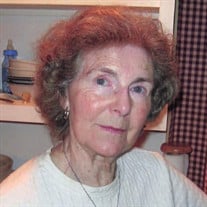 WESTBROOK – Rosamond “Mickey” Graves, 94, loving wife, mother, grandmother, great-grandmother, sister, aunt and friend, passed away peacefully on November 4, 2021. She was born in Westbrook on September 14, 1927, the daughter of Theodore R. and Corinne (Bergeron) Hanna. She graduated from Westbrook High School in 1945. She was a communicant of St. Anne’s in Gorham. She worked at the former Westbrook Trust Company, now the Bank of America, for 40 years. In 1947 she married John Graves who predeceased her in 1991. In addition to her husband, Mickey was predeceased by two sisters, Peggy Hanna Brooks in 1957, and Phyllis Jacqueline Reardon, predeceased in 2018. Rosamond is survived by her daughter, Nancy Lawson and her husband, Steven Lawson of Westbrook; three grandchildren, Erin Wolfe and her wife, Amanda Vickerson of Gorham, Danny Wolfe and his girlfriend, Kayla Archambault of Gorham, and John Wolfe and his wife, Kaitlin Wolfe of Gorham; and five great-grandchildren, Taylor, Stephen, Lincoln, Kayla, and Kinsey. A celebration of life will be at a later date. In lieu of flowers, donations can be made to: St. Jude Children's Research Hospital, 501 St. Jude Place, Memphis, TN 38105 or at, https://www.stjude.org/donate.

The family of Rosamond H. Graves created this Life Tributes page to make it easy to share your memories.

Send flowers to the Graves family.