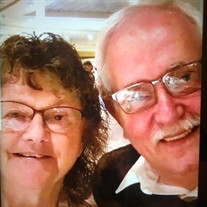 WINDHAM-- Ronald Wain, beloved husband, father, brother, Papa, and friend, passed away on December 18, 2020 at the Gosnell Home in Scarborough, Maine. Ron was born in Bangor, Maine and was the second child of nine siblings. There are 3 sets of twins for siblings. His sisters are Ethel Elizabeth (Betty), Deanna, Gloria, and Christina (Anne); twin brother Donald, and brothers Bruce, Reggie and Ernie. Ron married the heart and soul of his life, Sandra Harris O’Brien on November 1, 1980. The family settled in Windham, Maine and they have spent 37 years here. Ron has always felt privileged and blessed that marriage created a family that included his bonus sons, Shaun and David, and eventually his daughters-in-law and grandchildren. He always felt a special bond with Sandy’s parents, Wayne and Bunny Harris. Wyman Station power plant on Cousins Island in Yarmouth was where Ron made his career starting in 1980. He retired in 2015 after 35 years at the power plant. Ron’s hobbies were fishing and hunting bird and deer with many great friends. He enjoyed playing cribbage at Thayer’s Store and then at Corsetti’s. Great times with Sandy at the casinos, trips to Disney World, Las Vegas and the Caribbean Islands. He enjoyed woodworking at his home and recently made Adirondack chairs with a friend. You can see many items at their home that were made from his creative mind. Ron and Sandy loved to take their sons camping and enjoy the outdoors. He was also a dedicated volunteer for Windham Fire and Police. Ron was an active member and Elder of the Friends Church in Windham. He was a handyman and fixer upper person for the church. He and Sandy have made many friendships with the members of the church. If there was ever a true friend for life, it was Ron. He was always helping and volunteering for anyone in need. Laughter was a very large part of Ron. He always would have a joke to tell and the delivery was always great. He and Sandy have a large village of family and friends that have been part of their entire married life. Ron is predeceased by his sisters Betty Wingrove and Deanna Stearns, his twin brother Donnie Wain, father and mother-in-law Wayne and Bunny Harris, and several aunts and uncles. He is survived by his loving wife Sandy; son Shaun O’Brien and his wife Kristine, son David O’Brien and his wife Jill; granddaughters Kaitlyn and Sarah O’Brien, and grandson Devin O’Brien; sisters Gloria Thomas, Christina (Anne) and her husband Edward McCue, brothers Bruce Buckley and his wife Lana, Reggie Buckley, and Ernie Buckley. He is also survived by his brother-in-law Gary Harris and Lisa. The family wants to express heartfelt thanks to many family and friends who have been supportive and loving to them during their married life and this difficult time. Appreciation to Hospice of Maine for their assistance during a challenging time. Due to the pandemic, there will be a celebration of life for Ron in the spring or summer of 2021 with details to be announced. In lieu of flowers, donations can be made to Windham Food Pantry c/o Town of Windham, attention Linda Morrell, 8 School Road, Windham, Maine 04062.

WINDHAM-- Ronald Wain, beloved husband, father, brother, Papa, and friend, passed away on December 18, 2020 at the Gosnell Home in Scarborough, Maine. Ron was born in Bangor, Maine and was the second child of nine siblings. There are 3 sets... View Obituary & Service Information

The family of Ronald Wain created this Life Tributes page to make it easy to share your memories.

Send flowers to the Wain family.