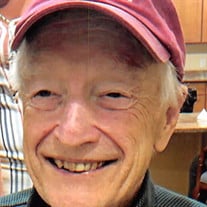 GORHAM – Ronald Franklin Pease, 84, went to be with his Lord on June 3, 2021. He was born in Rockland, the third of four sons of Palmer and Margaret (Beattie) Pease. He graduated in 1955 from Rockland High School where he loved playing football and received Honorable Mention on the All-Maine High School Roster. After graduation, Ron began studies at the University of Maine in Orono, earning a Bachelor of Science degree in chemical engineering, a five-year certificate in pulp and paper, with a Master’s Degree in Pulp and Paper Management. At the age of 13 he was introduced to his future wife and told her friends he was going to marry her. Being a man of his word, he did just that in 1958. In 1960 he graduated from UMO and they moved to Pennsylvania where he was employed by P.H. Glatfelter Paper Co. After five years and a yearning for Maine, he moved his family to Gorham and began his job in the Technical Service Dept. at S.D. Warren in Westbrook. Ten years later he moved on as technical service supervisor at Central Maine Power Co. on Cousins Island. Ron loved to dance. He loved music and sang in the choir at the South Gorham Baptist Church for over 30 years. He loved the outdoors. He canoed the Allagash, climbed mountains, camped, hiked, and skied. His favorite place to be was their camp in Friendship where he sailed, fished, swapped stories with good neighbors and chopped wood to his heart’s content. Ron loved helping people with whatever they needed and his quick humor and great smile were priceless. He was an honest man with deep faith, adventuresome and fun-loving. He will be greatly missed by his family and friends. Ron was predeceased by his parents; his son, Andrew; and two brothers, Richard and Gerald. He is survived by his wife of 63 years, Carolyn; daughters, Jill Brown and husband, Roger, Julie Hamlin and husband, Robert; and daughter-in-law, Manya Pease; brother, William Pease; grandchildren, Sarah (Jay) Wilson, Joshua (Leslie) Hamlin, Megan (Jeff) LaSante, Noah Brown, Anna (Alan) Delaney, and Isaac (Linh) Pease; 8 great-grandchildren, with one more on the way. Ron’s family is deeply grateful for the loving care he received at both Stroudwater Lodge and Avita of Stroudwater, along with Compassus. They are an amazing group of people. A visitation will be held, 6-8 P.M., Friday, June 11, 2021 at the Gorham Chapel of Dolby, Blais & Segee, 76 State Street, Gorham, ME 04038. A private funeral service for the family will be held this summer. In lieu of flowers, donations may be sent to Alzheimer’s Association, Maine Chapter, 383 U.S. Route 1, Suite 2C, Scarborough, ME 04074.

GORHAM &#8211; Ronald Franklin Pease, 84, went to be with his Lord on June 3, 2021. He was born in Rockland, the third of four sons of Palmer and Margaret (Beattie) Pease. He graduated in 1955 from Rockland High School where he loved playing... View Obituary & Service Information

The family of Ronald Franklin Pease created this Life Tributes page to make it easy to share your memories.

Send flowers to the Pease family.