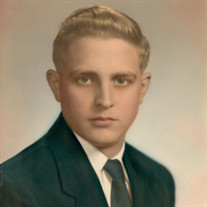 Ronald Ernest Maxim, 83, of Westbrook, Maine died March 01, 2021, at the Gosnell House in Scarborough. He was born on July 5,1937 in Maine. He was the only child of Raymond L. Maxim of South Paris and Clara Smith Maxim of Falmouth. Ronnie attended schools in Falmouth and Portland, graduating from Deering High School in 1955. He also graduated from Southern Maine Vocational Technical Institute (SMVTI) in 1957 as an auto mechanic. He worked as an auto mechanic at Chaplin Motors in Portland, Woodward & Austin. Along with his wife Sally, he also worked at Jackson Chevrolet, and then at Forest City Motor Co., he eventually moved into the position of Dispatcher, and then later retired from Forest City. He was married to Sally Ann (Hurd) Maxim for 54 years. After many years living on Highland Lake in Falmouth, they built a house in Westbrook where they lived a happy and busy life. Sally passed away on June 16, 2020. Together they enjoyed, boating on the lake, hunting at their camp in Lovell, and snowmobiling (They called him 'Ronnie Rupp' on the trail) as his first sled was a Rupp. He spent many a weekend in his front-row seat, drink in hand, at Sebec Lake as well. He truly enjoyed regular visits from his neighbors, family, and friends, especially in recent times. He spoke often of the appreciation he felt for those who cared for him and Sally throughout illness and loss. Special thanks to Evelyn (Mitzi) Duff and Michael and Ann Marie Dubois for all the friendship, care, and support provided to Ronnie and Sally. Ron is survived by three daughters and their husbands, Lynn Chick & Wayne of Westbrook, Laurie Bisson (or Spike, as her Dad called her) & Richard of Woolwich, and Lou Ann White & Raymond, of Naples, and their mother and Ronald’s former spouse, Patricia Ledger Maxim of Naples. as well as many grandchildren. He is also survived by sister in-law Donalene & Wayne Nelson, brother in-law Carl & Carol Hurd, sister in-law Delores & John Skip Robinson, Sister in-law Lori & Steve Anthony, and many nieces and nephews. Ron is predeceased by his wife Sally Maxim, his parents Clara and Raymond Maxim and parents in-law Alton and Marie Hurd, and brother-in-law Stephen Alton Hurd A graveside service will be held at Pine Grove Cemetery, 9 Waites Landing Road, Falmouth on Saturday, May 1st, 2021 at 11am.

Ronald Ernest Maxim, 83, of Westbrook, Maine died March 01, 2021, at the Gosnell House in Scarborough. He was born on July 5,1937 in Maine. He was the only child of Raymond L. Maxim of South Paris and Clara Smith Maxim of Falmouth. Ronnie... View Obituary & Service Information

The family of Ronald Ernest Maxim created this Life Tributes page to make it easy to share your memories.

Send flowers to the Maxim family.