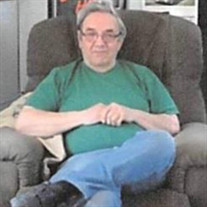 With his wife Priscilla holding his hand, Ronald Boulanger passed away on November 14, 2020 after a long illness. He was born on September 18, 1940 to Yoland and Edna (Larrivee) Boulanger. Some of Ron’s happiest childhood memories were playing practical jokes with his twin brother, Jerry, times spent with his family at their camp and the mischief he enjoyed getting into with his brothers and friends. After graduating from Westbrook High School, Ron served in the Air Force Reserves while working in the construction trade followed by his many years at SD Warren until his retirement. As a teenager, Ron began dating Priscilla Gouzie who lived up the street and once they got together, they never left each other’s side. Married on May 6, 1967, they remained devoted to each other for 53 years. They had a strong bond having fun together working on projects, hosting many family gatherings, going to camp, traveling and they took great pleasure in pampering the many dogs, cats, and other animals that were part of their household. Ron liked going on long rides with Priscilla with no agenda to where they were going. They would just drive along the way could always find a place to stop and look around and have a burger, Ron’s all-time favorite meal, and always with a Pepsi. Ron was a strong man, a hard worker who was skilled in many areas and excelled in fine carpentry. There was never a tool or a piece of machinery he didn’t appreciate. He did like his truck and tractors and dents, dirt and scrapes were met with a grin and shrug believing you use them to the fullest and you have fun doing it. Ron appreciated humor and many good times were spent at family gatherings on Sundays, going on scavenger road trips with his twin brother, Jerry, and in recent years at Richard’s in the Caboose laughing and telling stories. Ron could be funny and had a playful way of teasing his family members and took pleasure in getting a reaction and was accepting when the joke was on him. Ron was a kind, quiet, decent man. We all love him and he will remain with us forever. He is survived by his loving wife, Priscilla, his two brothers, Gerald Boulanger and wife Judith, and Richard Boulanger and wife Norma, his two sisters, Patricia Audet and husband Louie, and Susan Baillargeon, and his brothers and sisters-in-law, Shirley Boulanger, Pauline and David Rendall, Roger Gouzie, Diane and Dwight Bruns, John and Kim Gouzie, and several nieces and nephews. He was predeceased by his parents, Yoland and Edna Boulanger, his brother Donald Boulanger, his nephew, Vincent Boulanger, his sister-in-law, Doris (Gouzie) Featherson, and her husband Nelson, and his brother-in-law Donald Gouzie. A special thank you to the Falmouth Police and Rescue teams for their care and support. There will be no services. In lieu of flowers, please consider a donation in Ronald’s name to your local animal shelter.

With his wife Priscilla holding his hand, Ronald Boulanger passed away on November 14, 2020 after a long illness. He was born on September 18, 1940 to Yoland and Edna (Larrivee) Boulanger. Some of Ron&#8217;s happiest childhood memories were... View Obituary & Service Information

The family of Ronald Boulanger created this Life Tributes page to make it easy to share your memories.

With his wife Priscilla holding his hand, Ronald Boulanger passed...

Send flowers to the Boulanger family.