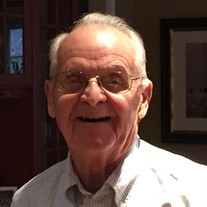 Roland G. (Choc) Caron, 92, passed away December 21, 2020, at Maine Medical Center from complications of Covid-19. Born in Westbrook, Maine, on July 19, 1928, he was the son of the late Alfred and Yvonne (Landry) Caron. Roland was a graduate of Westbrook High School, Class of 1946. After graduation, he played baseball in a semi-professional league until injury forced his retirement. He married Dorothy Buteau, his high school sweetheart, soon after her graduation from Westbrook High School and were married for over 71 years. After high school, he joined the apprenticeship program of Saco Lowell Spinning Co. and was employed by them until the company moved South. He then began a career at S. D. Warren Co. retiring in 1960 after a 30 year career. Roland was never a stranger to hard work whether at "the mill", in his workshop, or doing yardwork at his Westbrook, Maine, home where he resided for over 60 years. During retirement, Roland and wife wintered in Palm Harbor, Florida, where they enjoyed golfing and spring training games. He was a long and devoted Boston Red Sox fan and attended many games in Florida and Boston. The family of Roland would like to thank the many caregivers who cared for Roland and Dorothy in their later years including those of Home Instead, Bella Vita, Bay Square and Seal Rock Healthcare. Roland was predeceased by his parents, his sister June Morin and twin brother Ronald Caron. He is survived by his wife (who passed away one day later); his daughters Linda Taton and her husband Thomas of Scarborough, Maine, and Gail Shriver and her husband Peter of Marlborough, Connecticut; his grandchildren Joshua Taton and his fiancee Andrea of Philadelphia, Pennsylvania, Michal Fitzgerald and her husband Nicholas of Quincy, Massachusetts and McCullough Shriver of Marlborough, Connecticut; and his great grandchildren Josie and Thomas Fitzgerald of Quincy, Massachusetts; and several nieces, nephews, great nieces, great nephews, great-great nieces, and great-great nephews. A private graveside ceremony will be held in the spring 2021. Arrangements are by Dolby, Blais and Segee, Westbrook, Maine.

Roland G. (Choc) Caron, 92, passed away December 21, 2020, at Maine Medical Center from complications of Covid-19. Born in Westbrook, Maine, on July 19, 1928, he was the son of the late Alfred and Yvonne (Landry) Caron. Roland was a graduate... View Obituary & Service Information

The family of Roland G Caron created this Life Tributes page to make it easy to share your memories.

Send flowers to the Caron family.