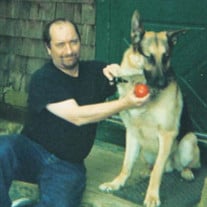 LYMAN—Roger Eugene Richard, 61, passed away August 15, 2020. He was born in Portland on February 25, 1959, a son of Robert Armand Richard and Berthilda “Beth” (Savoie) Richard. As a youngster, Roger attended St. Anne’s Church in Gorham. He was a graduate of Bonny Eagle High School in the class of 1977 where he was class President. While living in Manchester, New Hampshire, Roger worked as a taxi cab driver for many years and enjoyed the comradery of his clients. In 1982, Roger was the victim of a drunk driving accident, leaving him permanently disabled from being able to work. Some of Roger’s favorite past times were spent at the family camp in North Norway. It is in these woods that he shot his prized “big buck”. Roger was an amateur antique dealer and had an eye for a good deal, especially at yard sales. An intelligent man, he was often the winner of trivia competitions on the radio. Roger’s pride and joy was his beloved German Shepard “Creed” who predeceased him. An advocate for the underdog, he was a kind soul with a heart of gold who looked out for the less fortunate, often putting others before himself. Roger is survived by his loving mother, Berthilda “Beth” (Savoie) Knudsen of Westbrook; siblings, Stephen James Richard (Janet) of Naples, Dennis Knudsen (Cathy) of Turner, Richard Knudsen (Brenda) of Florida, Steven Knudsen (Jeanine) of North Carolina, Debra Knudsen (Dean) of Las Vegas, Cheryl Arsenault of Auburn, Freddie Hutchens of Augusta, and Jimmy Dalrymple (Mickey) of Limington; aunts Priscilla Belanger of Westbrook, Pauline Rogers of Westbrook; special friend and partner, Daniel Rusty Walker of New Hampshire; and many cousins, nieces and nephews and close friends. Roger was predeceased by both his fathers, Robert Armand Richard and Angus Knudesn in 2000; brother Eric Knudsen in 2014; grandparents James and Mary Ann Savoie, and Arthur and Rose Richard. The family would like to thanks all of Roger’s doctors, nurses, and close friends who cared for and supported him during his battle of cancer the past few months. A memorial service will be held on Friday, August 28, 2020 at 6pm at the Windham Chapel of Dolby Blais & Segee, 434 River Rd., Windham, ME 04062 where a period of visitation will be held beginning at 5pm until the time of service. In lieu of flowers, memorial contributions in Roger’s name may be made to Harvest Hills Shelter, 1389 Bridgton Rd., Fryeburg, ME 04073 or Responsible Pet Care, 9 Lower Swallow Rd., S. Paris, ME 04281.

The family of Roger Eugene Richard created this Life Tributes page to make it easy to share your memories.