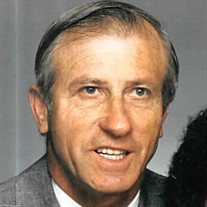 WESTBROOK & PORTLAND-- Roger Gerard LeBorgne, 94, of Westbrook/Portland, passed away peacefully of natural causes in his room at Ashton Gardens with his family at his side on April 7, 2021. He was born in Berlin, NH on November 5, 1926, son of Aristide and Apollina (Lambert) LeBorgne. The large LeBorgne family moved to Westbrook, ME in the early 1930’s while he was in elementary school. He lived in Westbrook for over eighty years. On June 21, 1952, he married the love of his life, Marilyn Venora Gray. Marilyn and Roger raised their six children in the family home on Lincoln Street where they resided together until 2014. Roger was a WWII veteran, joining the Army after graduating from Westbrook High School in 1944. He served two years and was stationed in Japan after the Japanese surrender. On December 30, 1950 he risked his life by saving a young boy who had fallen through the ice on the Presumpscot River. The rescue was documented with front page pictures and article in the Sunday Press Herald on December 31, 1950. Roger held the youngster for more than ten minutes after the ice gave way and he found himself in the water too. He worked at the local paper mill for over forty years, taking early retirement from Scott Paper at age 59. He was proud of his career and enjoyed his many co-workers and their social interactions. He was a man who always sought enjoyment out of life. Lifelong interests included card playing, hunting, golf and candlepin bowling. He loved dancing, camping, and traveling to many places with Marilyn. His true passion in life was his family and his love of family history and his remembrance of dates of family events, including the birthdays of all the LeBorgne nieces and nephews and his grandchildren. He was a devout Catholic and life long communicant at St. Hyacinth’s. He was a proud member of the American Legion and attended monthly meetings for many decades. In March 2019 he moved to independent living at Ashton Gardens in Portland where he made many new friends and especially enjoyed playing bridge and cribbage, and thoroughly enjoyed the prepared meals in the dining room. Roger was goal oriented and played games to win, especially when it came to playing cards. During the last few years he lived for four generation pictures, including the last one taken just two days before his death. He would not let himself go before he got that picture taken. Roger was predeceased by his parents, all his siblings and their spouses, his wife Marilyn and his son Ronald. He is survived by five children and their spouses; sons Ed and Solange, David and Adele; daughters Pamela and Jeffrey Lakin, Eileen and Chris Morton, Debbie and John Menzies; a daughter-in law Susan (Ronald), 13 grandchildren; Ben Lakin and Laura Kuhl, Alison Lakin, Craig and Hannah Lakin, Caitlin LeBorgne, Taylor LeBorgne, Paul LeBorgne and partner Lorri Dao-Chau, Anne LeBorgne and Kyle Hartsough, Nicholas and Afton Morton, Amanda (Morton) and Paul Rodriquez, Gregory and Emily LeBorgne, Kyle LeBorgne, Joshua and Rhianna Menzies, and Jeremiah Menzies: as well as 11 great grandchildren and many loving nieces and nephews. He is survived by his closest friend and a true confidant for over seventy years Jim Harris. He received exceptional care in his later years from his PCP Dr. Jillian Dur of Maine Medical Partners and compassion and comfort from Hospice of Southern Maine during his last stage of life. Visiting hours will be held on Friday, June 4 from 6-8 p.m. at the Westbrook Chapel of Dolby Blais & Segee, 35 Church St., Westbrook. A Mass of Christian Burial will be held on Saturday, June 5 at 10 a.m. at St. Anthony of Padua, 268 Brown St., Westbrook with interment to follow at St. Hyacinth’s Cemetery. In lieu of flowers, donations can be made to Hospice of Southern Maine, 390 US Route 1, Scarborough, ME 04074. To express condolences or participate in Roger’s online tribute, please visit www.DolbyBlaisSegee.com.

WESTBROOK & PORTLAND-- Roger Gerard LeBorgne, 94, of Westbrook/Portland, passed away peacefully of natural causes in his room at Ashton Gardens with his family at his side on April 7, 2021. He was born in Berlin, NH on November 5, 1926, son... View Obituary & Service Information

The family of Roger Gerard LeBorgne created this Life Tributes page to make it easy to share your memories.

Send flowers to the LeBorgne family.