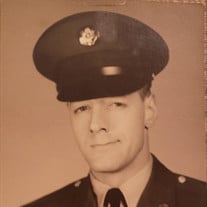 Westbrook- ROGER LEO LANDRY, 79, passed away peacefully July 27, 2020 at his home in Westbrook. He was born November 15, 1940 to Leo and Irene Lampron Landry. He grew up in Westbrook with his parents, brother Raymond and sister Dorothy. He enlisted in the United States Army and served in the Vietnam War as a helicopter mechanic. After serving his country, he attended SMCC and became a licensed electrician and was Staff Sargeant in the Maine National Guard. He worked at Stultz Electric and then SD Warren from where he retired in 2011. For many years, he owned his own business, Landry’s Electric Service. As a young man, he briefly raced at Beechridge Motor Speedway, where he claimed his car was “held together with chicken-wire". For many years, he taught First Aid courses through Adult Ed programs. He was an avid gun collector, enjoyed old movies, listening to music, camping and canoeing, especially down the Allagash and St. John Rivers. Trips to a friend’s hunting cabin in the fall were a favorite pastime, but instead of going out hunting, he would stay behind to simmer batches of his famous spaghetti sauce. He loved to make people laugh and one of his most impressive talents was his motorboat imitation. He even made the Portland Press Herald when he auditioned for Maine’s Funniest People performing that very routine. He didn’t win, but he made a lasting impression. Roger is the kind of person you can’t help but remember. He stays in your heart. Roger is survived by his partner of 25 years, Sandra Lavallee Grady, her son Joseph and Kelly Grady of North Carolina, Joseph, Patrick and Shane Grady of Florida, daughter Rosalie Grady and Craig Burnham of Westbrook, grandchildren Ayriel Chase and Elliott Armbruster, Violet and Addy Chase of Portland, Ethen Chase and Madison Harnois, and Fe Chase of Westbrook, Rayne Chase and Henry Redman of Westbrook, son David Grady and Crystal Huntley, Jasmyn and Noah Grady of Biddeford. Roger is survived by his daughter Anissa Landry Grant, husband Randall, grandson Travis and Nicole Grant, of Windham, granddaughter Ashley and Mackenzie Audet of Farmington, and his daughter Aimee Landry of Virginia. Roger is survived by his brother, Raymond Landry, Westbrook and sister Dorothy and Michael Rusczcyk, South Harpswell, and many nieces and nephews. He will be missed by a wealth of family and friends. Roger is predeceased by his parents, ex-wife Dolores Tanguay Landry, granddaughter Amanda Lynn Grant and his sister-in-law Rita Landry. A graveside service with Military Honors will be held Tuesday, August 11, 2020 at 12:00 Noon at the Maine Veteran’s Cemetery, 163 Mount Vernon Road, Augusta, ME.

Westbrook- ROGER LEO LANDRY, 79, passed away peacefully July 27, 2020 at his home in Westbrook. He was born November 15, 1940 to Leo and Irene Lampron Landry. He grew up in Westbrook with his parents, brother Raymond and sister Dorothy. He... View Obituary & Service Information

The family of Roger Leo Landry created this Life Tributes page to make it easy to share your memories.

Send flowers to the Landry family.