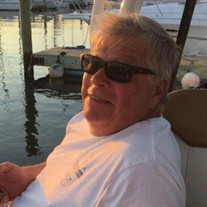 RODNEY HOWARD, 64, of Steep Falls, passed away peacefully on September 26, 2021 at The Gosnell House in Scarborough, Maine, surrounded by his loving family. He was born in Portland on September 23, 1957 to the late Roland and Theresa (Aube) Howard. Rodney graduated from Deering High School Class of 1975. After graduation, he attended trade school and then went on to work at Ridlons in Portland. He worked at Saunders Brothers in Westbrook and Fryeburg, S.D. Warren and lastly at EcoMaine in Portland where he made a career of 24 years, retiring in 2020 due to illness. While cut short, Rodney lived a great life. He was a hard worker, had an incredible mechanical ability and was a master of many things. He shared that knowledge with so many over the years. He was a volunteer on the Westbrook Fire Department in his earlier years. He owned and operated a body shop called Restoration Plus painting large tractor trailers. Rodney enjoyed hunting, snowmobiling, motorcycling, camping, scuba diving with his daughter, traveling and most recently cruising in the Mustang. Though he wasn’t well, he was still able to get out and enjoy the wind while riding in the Mustang. His true passion was spending time on his boat fishing on Sebago Lake, cruising Casco Bay and shark fishing offshore with his dear friend, Marc Duchaine. They had one day where they caught 10 sharks! He loved to share the boating and fishing experiences with family and friends. He enjoyed spending time with friends on the dock at Aspasia Marina. Rodney’s life was touched by so many people. Rodney was predeceased by his parents and his older brother, Dennis. He was also predeceased by his dog, Abby, who he loved and missed so much. Rodney was most proud of and loved his family very much. He is survived by his wife of 43 years, Linda (Francoeur) Howard; their children, Christopher Howard of Standish, Jennifer Allen and husband Jeffrey of Limington; grandchildren, Taylor Howard, Julia Howard, Brayden Allen, Brianna Allen and Wyatt Howard and a bonus grandchild, Olivia Gervais; siblings, Cynthia Burke, and her husband Robert of North Windham, Roland (Sonny) Howard, and his wife Kimberly of Portland and Denise Toppi, and her husband Alan of Westbrook. Rodney also leaves behind his Aunt Phyllis Wolstenhulme of Windham, many nieces and nephews. Rodney’s family would like to thank the staff at New England Cancer Specialists for being so committed to Rodney’s well-being during his illness and the staff at The Gosnell House for their tender and respectful care. Visiting hours will be held 2:00pm to 5:00pm Sunday, October 3rd at Dolby Blais & Segee at 35 Church Street, Westbrook. A Mass of Christian Burial will be held 11:00am, Monday, October 4th at St. Anthony’s, 268 Brown Street, Westbrook, followed by a Committal at St. Hyacinth’s Cemetery. A reception will follow at the American Legion Hall, 300 Conant Street, Westbrook. In lieu of flowers, donations may be made to the Gosnell Memorial Hospice House in Scarborough c/o Hospice of Southern Maine, 390 US Route One, Scarborough, ME 04074 or www.hospiceofsouthernmaine.org.

RODNEY HOWARD, 64, of Steep Falls, passed away peacefully on September 26, 2021 at The Gosnell House in Scarborough, Maine, surrounded by his loving family. He was born in Portland on September 23, 1957 to the late Roland and Theresa (Aube)... View Obituary & Service Information

The family of Rodney Howard created this Life Tributes page to make it easy to share your memories.

RODNEY HOWARD, 64, of Steep Falls, passed away peacefully on...

Send flowers to the Howard family.