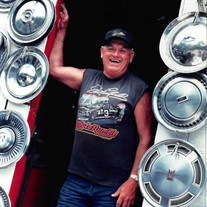 WINDHAM—Robert “Dick” Wolstenhulme, ten-time Beech Ridge Champion, racing “Iron-Man” and legendary “hub-cap” man, 87, passed away June 14, 2020 on his 63rd wedding anniversary at Mercy Hospital. He was born October 8, 1932, a son of John “Fred” and Lillian (McPherson) Wolstenhulme Sr.. He grew up in Windham, working alongside his father in the shop he built, which Dick continued on after his father’s passing. On June 14th 1957, he married Phyllis Howard. The two made their home in Windham, which has developed as a landmark for all who visit the town. Anyone who knows Dick is familiar with his thousands of shiny hubcaps he proudly displays at his shop. He had a love for “picking” particularly hub caps. In addition to his unique collection of hub-caps, Dick was a ten-time Champion at Beech Ridge Motor Speedway in Scarborough, in both classes, the late model and super-modified. Known as the “Iron Man from Windham” he proudly drove #99; his love for racing was instilled in his whole family and Beech Ridge was their second home. Dick was inducted in the inaugural class of the Maine Motorsports Hall of Fame. A character in his own right, Dick was an unforgettable man who loved his family above all else. His bond with his daughter Barbara was unmeasurable and he was known as “Ganky” to his beloved granddaughter, Janice and great grandkids Sawyer and Bennett who were the apples of his eye. Although he leaves a legacy of hub-caps and racing, he will be remembered for his salt of the earth qualities. When asked during an interview what life lessons Dick learned he responded, “Be good to people. Forgive them. Bite your tongue! If you can’t say nothing good, don’t say nothing.” He is survived by his loving wife, Phyllis Wolstenhulme; son in law, Donald Sawyer; granddaughter, Janice Douglas and her husband Ryan; great grandchildren, Sawyer and Bennett Douglas; a daughter Cindi Wolstenhulme; and several nieces and nephews. He was predeceased by his daughter, Barbara Sawyer; baby granddaughter, Kimberly Sawyer and his brother John F. Wolstenhulme Jr.. Dick’s funeral service will be held on Saturday, June 27th at 4pm at Beech Ridge Motor Speedway, 70 Holmes Rd., Scarborough, ME 04074. Following the service, visitation will be held until 7pm. Gates to the track will open at 3pm, attire is casual, and if you choose to BYOB, please bring a driver. In case of inclement weather, rain date set for Sunday, June 28th, same place, same time. Please note, social distancing measures will be taken at the track and masks are encouraged. In lieu of flowers, memorial contributions in Dicks name may be made to the Maine Vintage Racecar Association, 6 Lookout Drive, Windham, ME 04062. Arrangements are in the care of the Windham Chapel of Dolby Blais & Segee, 434 River Rd., Windham, ME 04062.

The family of Robert "Dick" Wolstenhulme created this Life Tributes page to make it easy to share your memories.

Send flowers to the Wolstenhulme family.