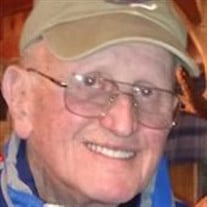 WESTBROOK & GORHAM - Robert H. Morton, 87, passed away at Gosnell Memorial Hospice House on April 21, 2021 after a long illness. Bob, the son of George and Elmire (D’Amour) Morton was born in Westbrook. He was a graduate of Westbrook High School where he was a member of the 1951 State Championship Basketball team. He graduated from the University of New Hampshire and served in the US Navy. Upon graduation from UNH, he was employed by Guy Gannett Publishing (Portland Press Herald) where he worked until his retirement. Bob married Margaret Hebert in 1959. For most of their married life Bob and Peg lived in Westbrook, where they raised their family. In later years, they moved to Gorham to enjoy condo life, but always considers themselves “from Westbrook”. Bob enjoyed skiing, golfing and in the later years hosting card games with his poker buddies. Bob and Peg looked forward especially to their annual family vacations on Peaks Island. He spent many years along with his brother-in-law, Jon Hebert, restoring apartment houses in Westbrook. Bob was a lifetime member of the Westbrook Eagles and the Downeast Ski Club. He also enjoyed membership at Rivermeadow Golf Course. He is survived by his devoted wife of 62 years; his daughter, Kimberly Hutchins, her husband, Paul and their children, Jed and Jesse; son, Chris Morton and husband, Tom Wegner; son, Kevin Morton; and beloved dog, Lucy. He was predeceased by his sister, Louise Morton. Relatives and friends are invited to attend a visiting hour starting at 10:00 a.m., Thursday, April 29, 2021 followed by a memorial service, 11 a.m. at the Westbrook Chapel of Dolby, Blais & Segee, 35 Church Street, Westbrook. In lieu of flower, please consider making donations to Gosnell Memorial Hospice House, 11 Hunnewell Road, Scarborough, ME 04074 or the Animal Refuge League of Greater Portland, 217 Landing Road, Westbrook, ME 04092. To express condolences and to participate in Bob’s online tribute, please visit www.DolbyBlaisSegee.com

WESTBROOK & GORHAM - Robert H. Morton, 87, passed away at Gosnell Memorial Hospice House on April 21, 2021 after a long illness. Bob, the son of George and Elmire (D&#8217;Amour) Morton was born in Westbrook. He was a graduate of Westbrook... View Obituary & Service Information

The family of Robert Howard Morton created this Life Tributes page to make it easy to share your memories.

Send flowers to the Morton family.