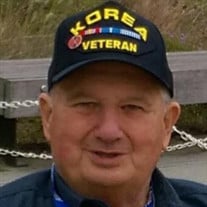 Westbrook, Robert Elwin Meggison, 90 of Westbrook passed away peacefully at the Gosnell Memorial Hospice House on November 27, 2021. He was born in Westbrook on May 24, 1931, the son of Ernest E. Meggison and Alice (Leighton) Meggison. He lived most of his life in Westbrook except from 1939-1945 when he moved temporarily to Newport, RI. during WW2 so his father could work on Goat Island making torpedos. He returned to Westbrook and was a member of the graduating class of 1952. He excelled in football and track as a student there. Upon graduation, he enlisted into the U.S. Army and stayed in for 22 years, 2 years active in the Korean War. He was discharged as a Sargent First Class. He was so proud of his military service and his country. He came home from the war and married the love of his life, Astrid (Jensen) Meggison on June 2, 1956 and spent almost 64 years together before her passing February 15, 2020. He worked as a machinist at Southworth, then Knowltons in Westbrook for 10 years and then to S.D. Warren for 30 years. He loved it at the mill, made many friends for life, and the stories he would tell. In his free time, he taught hunter safety and snowmobile safety for the State of Maine. He was a true outdoorsman – hunting, snowmobiling and fishing. He coached little league for 4 years when his son was playing ball. He bowled on the S.D. Warren men’s league for many years. He was an active member of American Legion Post 62 including being the post commander. His favorite place on earth was his camp on Crescent Lake in Raymond. It was built by his father and grandfather in 1928. It was always great family time, teaching us to swim, fish and waterski. His father came to Maine every summer from California and they always worked on projects together. He loved to feed the chipmunks peanuts out of his hand. Also the bird feeders were always filled he enjoyed watching them. He and Astrid traveled in their truck camper all over the country. The camper retired when duct tape no longer could hold it together! He survived by his daughters, Julie (Meggison) Reider and her husband Chuck of Port Charlotte, FL; Cindy (Meggison) Ouellette and her husband Tim of Derry, NH; and son Bill Meggison and his wife Micki of Gorham; grandchildren, Alex Ouellette and fiancée Kerry of Alton, NH, Shaun Ouellette of Derry, NH, and Ionela Ouellette of Manchester, NH, as well as numerous cousins, nieces and nephews. Visitation will be held on Sunday, December 5th, from 2 to 4 PM at the Westbrook Chapel of Dolby, Blais & Segee 35 Church St. Westbrook, ME 04092. A Graveside Service will be held on Monday, December 6 at 11:00 am at Woodlawn Cemetery, Westbrook. In lieu of flowers, memorial contributions made be made to Honor Flight Maine, PO Box 1770, Portland, ME 04104 or honorflightmaine.org or Trinity Lutheran Church, 612 Main Street, Westbrook, ME 04092.

Westbrook, Robert Elwin Meggison, 90 of Westbrook passed away peacefully at the Gosnell Memorial Hospice House on November 27, 2021. He was born in Westbrook on May 24, 1931, the son of Ernest E. Meggison and Alice (Leighton) Meggison. He lived... View Obituary & Service Information

The family of Robert Elwin Meggison created this Life Tributes page to make it easy to share your memories.

Send flowers to the Meggison family.