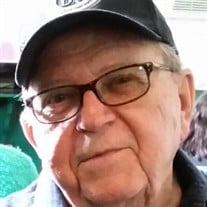 Robert James Maloy, 93, of Windham, Maine passed away peacefully at home surrounded by family on Saturday April 24, 2021. He was born in South Portland, Maine on March 21, 1928 to William A. Maloy and Florence (Robinson) Maloy. He attended South Portland schools and was a U.S. Army Veteran serving in the Panama Canal. He was employed by Maine Central Railroad as a Locomotive Engineer for 30 years. Bob married Margaret E. O’Toole in 1957: she passed away in 1962. On November 30, 1963 he married Nancy Sorensen Petersen, with whom he spent 54 happy years until her death in 2017. He was a 58 year member of Hiram Masonic Lodge #180 Scottish Rite of Portland, Corner Stone Chapter #193 Order of the Eastern Star, Kora Shriners of Lewiston and the American Legion Post 148 in Windham. Bob was a history buff and his knowledge of Past Wars, American History and World events was extensive. He was a big fan of TB12 and the New England Patriots. He also had the privilege to see the Boston Red Sox break their 86 year curse of the Bambino. Bob is survived by his children; Dana Petersen and wife Debbie, Robert W. Maloy, James Maloy and wife Vicki, Lisa Jones, Kristine Trull and husband Jack, and Barbara Clark Hazel. Grandchildren; Amy Richards, Jeffrey Jones and wife Kayla, Jamie Cormier and husband Jason, Chelsea Loe and husband Quentin, Malory Petersen, Erik Petersen, Krystal Arenstam and husband Jacob, and John Trull. Great grandchildren; Emma Raymond, Ava Pablo, Emily and Molly Jones, Grayson and Jackson Loe. Sister in law Sonja Sorensen Rollins and husband Richard. And many wonderful nieces and a nephew. He was predeceased by his parents, wives, his sisters Mildred and husband Samuel Hinds, Edna and husband William Shattuck, Brother William Maloy and wife Olga, and son in law Grant Jones. Graveside services will be at Brooklawn Memorial Park 2002 Congress St. Portland, Me. Thursday April 29th at 10:00am In lieu of flowers, donations may be made to: Shriners Hospitals for Children – Boston. 51 Blossom St Boston, MA 02114 Or Hospice of Southern Maine 390 US Route One Scarborough, ME 04074 Or online at: www.hospicesouthernmaine.org/give Arrangements are in the care of the Windham Chapel of Dolby Blais & Segee, 434 River Rd., Windham.

Robert James Maloy, 93, of Windham, Maine passed away peacefully at home surrounded by family on Saturday April 24, 2021. He was born in South Portland, Maine on March 21, 1928 to William A. Maloy and Florence (Robinson) Maloy. He attended... View Obituary & Service Information

The family of Robert James Maloy created this Life Tributes page to make it easy to share your memories.

Send flowers to the Maloy family.