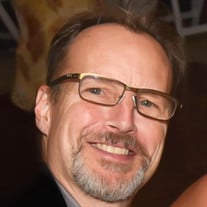 Robert Frederick Leighton, Jr., 55 of Westbrook, passed away peacefully in his home surrounded by family and friends on Friday, June 12, 2020 after a courageous fight with cancer. Robbie was born on September 20, 1964 in Portland, Maine to Robert F. Leighton, Sr. and Louise Leighton. A lifelong resident of Westbrook, he attended Pride’s Corner School, Westbrook Junior High, and graduated from Westbrook High School in 1982. He was a member of the high school band and excelled in math. Growing up, he loved spending time at his relatives’ camps and then his own family’s camp on Sabbady Point Road on Little Sebago Lake, which his parents bought when he was in junior high. He met Charlene Marie Gouin and they married on November 24, 1990. He built his own home where his grandparents’ house had stood on Austin Street in Westbrook. He was a devoted and caring husband and father. Their two children, Meliah and Jameson, were the center of his life. He was actively involved in their interests, attending their various sporting events no matter the season to cheer them on. He was always there for his children, celebrating both big and little milestones throughout their lives. Rob was a hard worker and enjoyed a long career at Shaw’s Supermarket for over 30 years. His work ethic and commitment to his career was admired by his coworkers and anyone who knew him. When he wasn’t building something, playing with his dogs, or enjoying a long ride on his Harley Davidson, you could find Rob spending time with his family and friends. Rob was an active outdoorsman and loved spending time in the outdoors, especially in Baxter State Park. His interests included hiking, camping, and climbing Mt. Katahdin, which he had accomplished multiple times. Rob was, from the beginning of his life to the end, a man of few words with a big heart. His time on Earth was far too short and he will be missed by so many. Throughout Rob’s illness, he found comfort in the following quote: “Over every mountain there is a path, though it may not be seen from the valley.” He encouraged his family and friends to always have faith, hope, and love. Rob was predeceased by his father Bob Leighton. He is survived by his wife Charlene and their two children Meliah and Jameson; mother Louise Leighton; sister Linda (Paul) Bois; father and mother-in-law Roger and Barbara Gouin; brother-in-law Michael Gouin; sister-in-law Diana (Sam) Ellis; nieces and nephews Kathryn and Kevin Bois, Melissa and Tracy Gouin, Brad and Cassandra Ellis; and grand-nephews Lucas and Brady. Rob also leaves behind countless extended family members, friends, and coworkers who will all miss him dearly. A wake and service will be held on Thursday, June 18 from 4:00-7:00 p.m. at the Dolby, Blais & Segee Chapel on 35 Church Street in Westbrook. The family would like to extend a special thank you to all the dedicated doctors and nurses at Mercy Hospital in Portland, Maine and Dana-Farber Cancer Institute in Boston, Massachusetts. In lieu of flowers, donations can be made in Rob’s name to Mercy Hospital, Attn: Development Office, 144 State Street, Portland, ME 04101 or Dana-Farber, PO Box 849168, Boston, MA 02284-9168. To express condolences or to participate in Rob’s online tribute please visit www.DolbyBlaisSegee.com

Robert Frederick Leighton, Jr., 55 of Westbrook, passed away peacefully in his home surrounded by family and friends on Friday, June 12, 2020 after a courageous fight with cancer. Robbie was born on September 20, 1964 in Portland, Maine to... View Obituary & Service Information

The family of Robert "Rob" Frederick Leighton Jr created this Life Tributes page to make it easy to share your memories.

Send flowers to the Leighton family.