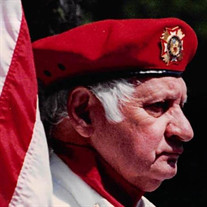 PORTLAND - Robert E. Joy, 89, passed away on Tuesday Nov. 2, 2021 after a brief illness. He was born in Portland on March 19, 1932 the only son of Weldon and Gertrude (Bass) Joy. He attended St. Patrick’s School, Cheverus High School and graduated from Portland High School in 1950. In his senior year of high school he joined the Naval Reserve and upon graduation joined the United States Navy, serving from 1951-1953. He was assigned to the destroyer USS Cowell during the Korean Conflict. Bob was a very hard worker, starting as a child cleaning bricks to earn money until he retired from S. D. Warren in 1992 after 36 years of service. He was an active member of Deering Memorial Post 6859 Veterans of Foreign Wars and the American Legion. He was a lifetime member of the V.F.W. serving on the color guard. He married Jacqueline Clark Lydon in September of 1954. They were married 51 years before her passing in 2006. The family would like to thank the staff of Seventy Five State Street for their patience, love and care of Dad. We know he was a tough one! In addition to his wife, he was predeceased by his parents; daughter, Brenda Pralicz; sister, Winifred Beecher; and great-granddaughter Kiara Geisenger. He is survived by his children, Allyn (Valerie), David (Susie), Brian (Susan); stepson, Michael Lydon (Judy); sister-in-law, Lorraine McDade; 15 grandchildren and step-grandchildren; and several great-grandchildren. Relatives and friends are invited to attend a visitation, 10 a.m. to 12 p.m., Monday, November 8, 2021 at the Windham Chapel of Dolby, Blais & Segee, 434 River Road, Windham, where a funeral will be held at noon. Burial with military honors will immediately follow the funeral service at Brooklawn Memorial Park, Portland. In lieu of flowers please donate to a charity of your choice or donations may be made in memory of Bob Joy to the Seventy Five State Street for the benefit of the Resident Activity Fund 75 State Street, Portland, Maine 04101.

The family of Robert E. Joy created this Life Tributes page to make it easy to share your memories.

Send flowers to the Joy family.