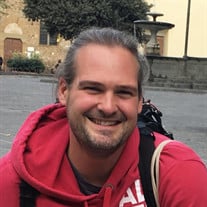 Robert Christopher “R.C.” Schmidt, 41, formerly of Buxton, ME, passed away on February 22, 2022 in Portsmouth, NH. He was born on December 12, 1980, the son of Robert and Alfreda “Kit” (Morin) Schmidt. R.C. grew up in Buxton, attended high school at Cheverus in Portland for one year then Westminster in Sinsbury, CT. He went on to college at the United States Military Academy West Point. He then furthered his education at Hobart College in Geneva, NY. He moved to NYC in 2005 where he worked until 2016 as a very successful commodities trader. In 2005 he met his wife, Amanda “Mandie” (Torrisi) Schmidt, whom he married in Italy in 2010. R.C. and Mandie had the opportunity to live in London, the US Virgin Islands, Amsterdam and Italy. R.C. loved hockey and played from a young age through his college years. He had a passion for life, loved sailing, the beach, reggae music, his dog Rolo, and traveling the world. R.C. was an amazing human who was kind and caring towards everyone he met. He was an inspiration of strength and positivity. He will be deeply missed by so many. He is survived by his parents, Bob and Kit Schmidt, his sister Margaret Schmidt, and his wife Amanda Schmidt. A Funeral Mass will be celebrated at 10:00 AM on Monday, February 28, 2022 at the Cathedral of Immaculate Conception, 307 Congress St., Portland, ME 04101. This will be followed by a celebration of life at The Kings Head, 254 Commercial St, Portland, ME 04101 In lieu of flowers, donations may be made to the Appendix Cancer Pseudomyxoma Peritonei Research Foundation (ACPMP) by visiting acpmp.org

The family of Robert "R.C." Christopher Schmidt created this Life Tributes page to make it easy to share your memories.