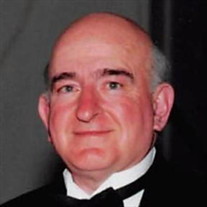 Richard P. Wight, 82, of Westbrook, passed away on June 22, 2020. He was born on October 9, 1937 to parents Ella (Cobb) and Roy Wight in Belfast, Maine. Richard went to Gates Business School in Augusta to get his associates degree. He married his wife, Doris, on September 6, 1958 and together they shared 54 years of marriage before her passing in 2013. Richard and Doris raised six sons together in Westbrook, and the happiest moments in his life were the birth of their children, many grandchildren, and great grandchildren. Richard was the Chief Financial Officer of Peerless Welding for a number of years. Richard’s last job was at Emery Waterhouse, from which he retired in 2003. Throughout his life he was an avid outdoorsman, taking any chance he could to go hunting, fishing, camping and his favorite activity, golfing. He was a proud 59 year member of the Masons, with 29 years being a 32nd degree Mason and 57 year member of the OddFellows. Richard also enjoyed his years of coaching Tuffy Football and Little League. Richard is survived by his sons; Daniel, and his wife, Lisa of Westbrook and their children, Mathew, Andrew, and Emily and Richard’s great grandchildren, Tyler, Maxwell, and Noah; William, of Gorham, and his children Jessica, and Katherine; James, and his wife, Jennifer of Westbrook and their children Michael and MacKenzie; Donald, and his wife, Janet of Saco; Dennis, and his wife, Gretchen, of Windham, and Thomas of Westbrook. He is also survived by his siblings, Eloise, Eleanor, and Nelson. He was predeceased by his wife, Doris, his parents, and siblings Tom, Stewart and Pete. Visiting hours will be held on Monday, June 29, 2020 from 1:00pm to 3:00pm followed by a service at 3:00pm at Windham Chapel of Dolby Blais Segee, 434 River Rd., Westbrook, ME 04082 with a private burial.

Richard P. Wight, 82, of Westbrook, passed away on June 22, 2020. He was born on October 9, 1937 to parents Ella (Cobb) and Roy Wight in Belfast, Maine. Richard went to Gates Business School in Augusta to get his associates degree. He married... View Obituary & Service Information

The family of Richard P. Wight created this Life Tributes page to make it easy to share your memories.

Send flowers to the Wight family.