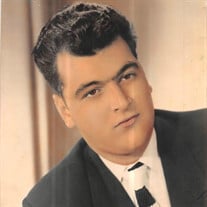 WESTBROOK—Richard “Dick” Paul Perry, 87, passed away September 10, 2020. He was born in Portland, Maine on August 14, 1933, a son of Paul and Louise (Papazian) Perry. Losing his mother at the age of seven, Richard’s father relocated he and his brother Gordon back to the family roots on Prince Edward Island. Returning to Maine as a teenager, Richard was drafted into the Army, proudly serving his country for almost two years while stationed in Germany; he was honorably discharged on September 30, 1955. Richard married Dolores Morrison on June 8, 1956 and the two eventually settled on Saco Street in Westbrook where they remained for over 60 years. Dick worked as a meat cutter and was employed by Martins Foods, Shield Meats, Jordan’s Meats throughout the years. Dick was a member of the American Legion Post #197, as well as the Eagles Club in Westbrook. He was an avid card player, known for playing Gin Rummy and Poker. He could often be seen walking his beloved German Shepherds: Rocky 1, 2, 3, and Silver. Above all, Dick was a family man who loved hosting holiday’s and family gatherings where he enjoyed teasing his beloved grandkids and cooking food for all to enjoy. He is survived by his children, Paul Perry, Karen Swaim (Gary Snow), and Christina Davis (Lary); a brother, Gordon Perry (Elizabeth); his grandchildren, Travis Swaim (Sophia), Jennifer Brown (Russell), Marilyn Baker (Kristopher), Monica Davis, and Grant Davis; and great grandchildren, Felix Swaim, Hazel Swaim, and Brody Baker. He was predeceased by his loving wife of 57 years, Dolores Perry, and his daughter in law, Deborah Perry. A graveside service will be held on Friday, September 18, 2020 at 1pm at Forest City Cemetery in South Portland. Arrangements are in the care of the Westbrook Chapel of Dolby Blais & Segee, 35 Church St., Westbrook, ME 04092.

The family of Richard "Dick" Paul Perry created this Life Tributes page to make it easy to share your memories.

Send flowers to the Perry family.