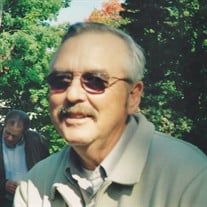 Richard W. Francoeur, 75 of New Portland Road in Gorham passed away April 2, 2022 after a short illness at home with his family by his side. He was born in Westbrook and is the son of Rene and Rose ( Vachon) Francoeur. He was raised in Gorham and graduated from Gorham High School in 1964. Richard worked for F.S Plummer in Gorham, Pratt & Whitney in Connecticut and for 36 years at S.D. Warren Paper Co. before retiring. Richard enjoyed hunting with his son Don, his brothers and his nephew Mike, fishing, bowling and golf. A passion of his was working on race cars with his brother-in-laws Roger and David. His greatest joy was spending every moment with his best friend his wife Ang and his family. Oxford Casino was one of his favorite times with his wife which he looked forward to every “Cookie Wednesday”. The Francoeur residence was the gathering for all the family reunions, horseshoes, baseball games and swimming in the pool. His children, grandchildren and great grandchild were the loves of his life. He is predeceased by his parents, his brothers Maurice and Bertrand, and brother-in-law Philip Duchaine. He is survived by his wife of 55 years Angela ( Leclerc) Francoeur of Gorham, a son Donald and his wife Heidi of Limington, a daughter Carol Butts of Windham and her children, Alec Butts of Windham and Lauren Austin and partner Mike Shugars of Lisbon Falls and his great grand child Theo. A sister Janet Duchaine of Saco and a brother Robert L Francoeur and wife Christine of Fort Meyers Florida. As well as many nieces, nephews and friends. The family would like to thank Dr. Bian and all her staff at Maine Medical Oncology, Dr. Johnson his MD and Hospice for their compassion and dedicated service. Visiting hours will be from 4-6 pm on Sunday April 10th at Dolby Blais & Segee, 35 Church St., Westbrook. A mass will be celebrated at 10am Monday April 11th at St. Anthony’s at St. Hyacinth Church. In lieu of flowers, donations may be made to Hospice of Southern Maine 390 US RT 1 Scarborough ME 04074.

Richard W. Francoeur, 75 of New Portland Road in Gorham passed away April 2, 2022 after a short illness at home with his family by his side. He was born in Westbrook and is the son of Rene and Rose ( Vachon) Francoeur. He was raised in Gorham... View Obituary & Service Information

The family of Richard W. Francoeur created this Life Tributes page to make it easy to share your memories.

Send flowers to the Francoeur family.