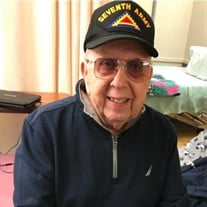 Richard "Dick" Parry, 86, passed away peacefully on Monday, March 28, 2022 at the Maine Veterans' Home in Scarborough after a 5 year battle with dementia. Dick was born in Philadelphia, PA to William Parry and Dorothy (Loring) Parry on September 20, 1935. He spent his early years in Delanco, NJ before moving to Windham, ME when he was thirteen. Shortly after graduating from Windham High School in 1953, he was drafted into the U.S. Army. He served 2 terms then released to the USAR until 1964. He enjoyed the time he spent in the army and was always very proud of his service. Throughout his career he worked for both Coca Cola and Pepsi Cola in their Service Departments. He was a very proud father to his two children, Wayne and Raelene. He enjoyed supporting them in attending their many sporting events as children. In 1979, he married his wife Janice (Pray) Parry. Their happy times were spent camping, going on cruises, boating on Sebago Lake and family gatherings. You could always catch Dick sitting at the head of the table preparing his biscuit with strawberry jam, a personal favorite of his. He also very much enjoyed his pets, with his dog Penny being like another child to him. Dick was predeceased by his father, mother and sister, Suzanne Tandberg. Dick is survived by his wife Janice Parry, son Wayne Parry, daughter Raelene Loura, sister Janet Jones, stepson Steven Pray (wife Laura), stepdaughter Kristin Viens (husband David) and grandchildren, Tiffany Loura, Sara Loura, Derek Pray, Summer Pray, and Michael Viens. The family invites you for a time of visitation on Saturday, April 9th at 10AM at Dolby Funeral Chapel in Windham, ME. Visitation will be followed by a funeral service at 11AM. A private committal service is to be held at a later date. In lieu of flowers please consider donation to the Maine Veterans’ Home activities, Scarborough ME.

Richard "Dick" Parry, 86, passed away peacefully on Monday, March 28, 2022 at the Maine Veterans' Home in Scarborough after a 5 year battle with dementia. Dick was born in Philadelphia, PA to William Parry and Dorothy (Loring) Parry on September... View Obituary & Service Information

The family of Richard "Dick" Parry created this Life Tributes page to make it easy to share your memories.

Send flowers to the Parry family.