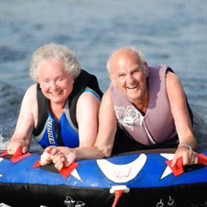 Richard Daigle of Windham, Me, formerly from Van Buren, Me. August 7, 1931 to January 22, 2022 Richard considered himself lucky in love and in life. He enjoyed 65 years of wedded bliss with his wife Joan, and they will finally be reunited after she passed away last March. Even when he was young, Richard liked to do things the old-fashioned way, which is to say that he liked to do them right. A natural engineer, Richard always had a knack for figuring things out, whether he was on the farm, job site, puttering in the garden, or fixing things around the house. Those instincts served him well over the course of a lengthy career as a construction superintendent, a role that he thrived in even though he never received a formal engineering degree. His work often took him away from home, but he seldom stayed away for long. Richard (or Dick to his friends) loved the family homestead in Van Buren. He knew where to find the best hazelnuts, the best apples, and the best cerise, and which trails were the best trails for rides on the ATV. He truly relished life’s simple pleasures and did his best to share them with those closest to him. Richard always made time for cocktail hour and was gracious when his grandchildren tried to steal his olives from his martini. At dinner, he tossed ployes like frisbees to make sure they’d still be hot when they hit the table. He made hand-crafted wooden toys for his grandchildren (and wine and moonshine for the adults), displaying a genuine curiosity for the world and what could be accomplished with a bit of ingenuity and his own two hands. His happiest moments, however, were the ones he spent with Joan. Richard was an avid dancer, and together they could turn heads as they glided across the floor. They made a life and grew old together, and everyone around them knew that they loved one another until the end. In his later years Richard and Joan moved to Windham, Maine to live with his son Chuck, and to be closer to the rest of the family. He regularly traveled to visit his children and grandchildren, and remained independent until the end, thanks to the love and support from Chuck and Anne. Richard will be missed by many. He is survived by five children, Robert and Trina Daigle of Newmarket, NH, Carol Daigle and Steven Weiss of Longmeadow, MA, Chuck and Anne Daigle of Windham, ME, Patricia Daigle and Dennis Hopkins of Lakewood, WA and Peter Daigle of Johnson, Vermont. He also leaves 11 grandchildren, Sam St. John, Frank and Kaitlin St. John, Eric Weiss and Miroki Tong, Rachel Weiss and Andrew Sia, Matthew Weiss, Lukas Daigle and Alyssa Turner, Kaitlyn and JJ Soupakhot, Myya Daigle, Andrew Daigle, Marlee Hopkins and Ruby Hopkins, as well as honorary grandchildren Sarah Cohn and Chutong Zhu, and his 5 great grandchildren Madison Daigle, Ryland Soupakhot, Keira Soupakhot, Arone Soupakhot, and Fredrick Sia, in addition to numerous nieces and nephews, great nieces and nephews. He was predeceased his wife Joan and by his daughter Rose Marie (Robert) St. John of Argyle, NY.

Richard Daigle of Windham, Me, formerly from Van Buren, Me. August 7, 1931 to January 22, 2022 Richard considered himself lucky in love and in life. He enjoyed 65 years of wedded bliss with his wife Joan, and they will finally be reunited after... View Obituary & Service Information

The family of Richard L Daigle created this Life Tributes page to make it easy to share your memories.

Richard Daigle of Windham, Me, formerly from Van Buren, Me. August...

Send flowers to the Daigle family.